Brazil’s legendary 1970 side of Pelé, Rivelino, Jairzinho and Carlos Alberto are still regarded as the greatest World Cup team in history and despite being favourites again this time, the 2022 iteration is unlikely to hit those glorious heights. But Brazil are surely due a big tournament, having not lifted the trophy since 2002 when Ronaldo (the real one) shook off the trauma of the 1998 final by plundering eight goals and even finding time for a daft haircut.

Looking at 20-year cycles bodes well for Brazil. In 1962: winners, 1982: best team not to have won, 2002: winners. But if his side are leaning on fate, current manager Tite will quickly drum that out of them as Qatar 2022 is fast developing into a World Cup of shocks. Saudi Arabia and Japan have stunned Argentina and Germany, respectively and Thursday’s opponents Serbia have the potential to tweak Brazil’s noses, even though the Seleção beat them at this same stage in 2018. Brazil haven’t failed to top their World Cup group since 1978. If that streak ends here, maybe history is crumbling before our eyes.

Which seems a good time to revisit Pelé’s quote that an African nation would win the World Cup by 2000. That claim in 1977 gave the Brazilian legend six editions of the event to play with. He clearly needed more. Time has ticked on and no African side is yet to even make a semi-final. Three have reached the quarters and two of those, Cameroon and Ghana, make their Qatar 2022 bows on Thursday. Despite the memories of Roger Milla’s corner flag dances and the collective felling of a hurdling Claudio Caniggia in 1990, Cameroon haven’t won a match at the World Cup since 2002. Thursday’s opponents Switzerland look strong enough to extend that unwanted sequence further.

Ghana kick off their campaign against a Portugal side determined to prove that Cristiano Ronaldo’s ignominious exit from Manchester United can be put in a separate box marked club football. “We haven’t discussed the topic. We are all focused on the national team and the World Cup,” said his now former Old Trafford teammate Bruno Fernandes. While the perfect ending for Lionel Messi is now under threat after Argentina’s opening loss, perhaps we’ve all forgotten that a humongous last hurrah (and a mighty last laugh) for Ronaldo isn’t beyond the realms.

Japan’s win over Germany will have given South Korea a boost before their game against Uruguay. The two Asian nations excelled as co-hosts in 2002 but the Koreans generally have a ceiling in the World Cup and, unfortunately for them, it’s the group stage. They’ve gone out after three games in eight of their other nine World Cup appearances: even last time when Son Heung-min helped them to a 2-0 win against Germany. Son’s participation in Qatar looked under threat after he suffered a fractured eye socket but the Spurs frontman has been cleared to play. He’ll be wearing a protective mask against Uruguay; no bad thing perhaps with Luis Suárez on the opposing side. DT

A compact World Cup might help players
There’s not a lot to be said for hosting a World Cup in Qatar – you know why. Nor is there much to said for holding one in middle of almost every competing country’s season – players who’ve worked their entire lives to reach the competition, then earned the right to play in it, are missing it injured, while those who win and lose the final will have no time to assimilate the best and worst night of their lives before schlepping home, the majority likely to the depths of a European winter. But perhaps there is one aspect which is working: even the poor games we’ve seen so far have been played at pace and with intensity, presumably because the teams are able to rest without having to spend time travelling about, just as they’re not knackered at the end of a long 10-month slog. DH

Lesser lights benefit from being brave
That intensity, though, was noticeable by absence in the players of both Argentina and Germany once they took the lead against Saudi Arabia and Japan, and both were deservedly beaten. It may still be possible for the better teams to coast through some games, but it is a dangerous business, and the shocks have come with a lesson for the supposed lesser lights too: be brave and be aggressive. Saudi Arabia knew this already, playing with a high line and flying into challenges, but Japan had to learn it on the fly, forced to change tack after falling behind – to devastating effect. Teams such as South Korea, Ecuador and Serbia would do well to pay heed. DH 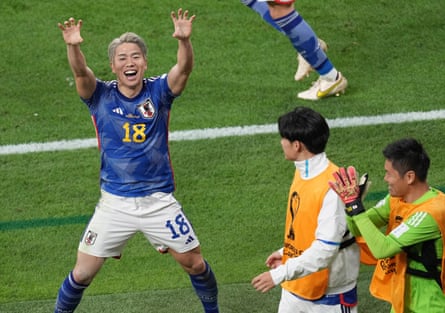 Takuma Asano of Japan celebrates after scoring during the winner against Germany. Photograph: Xinhua/Shutterstock

Ecuador fans endeared themselves to supporters the world over by shouting “We want beer” during their opening-game win over Qatar. But sadly, there was a depressingly familiar tone to another of their ditties, and for that reason they’ve been charged by Fifa with homophobic chanting. It is, of course, Fifa that allowed the World Cup to be held in a country where it’s illegal to be gay, then invoked the laws of the game to deter players from protesting against it and its host nation’s appalling behaviour, but sadly it remains unmoved by its own hypocrisy. DH

Under a headline “Debacle start for Germany!” Bild set the tone for after the defeat by Japan left them staring down the barrel of a second consecutive early World Cup exit. “This is just unreal,” the tabloid newspaper thundered. “The national team made a fool of themselves at the start of the World Cup with a 2-1 loss against outsiders Japan … The debacle is reminiscent of the bitter tournament in Russia in 2018, where Germany lost 1-0 to Mexico and were eliminated from the group stage for the first time.” 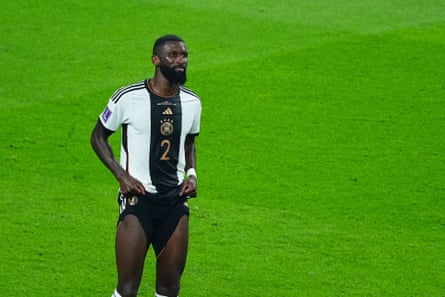 The result leaves Germany facing a crunch Group E match against Spain described as “already a final” by Bild. The added warning is that it comes against a team Germany have beaten just once in their past seven meetings (two draws, four Spain wins). Meanwhile, the Bavarian Football Works website saw the result as abysmal, but not a shock considering the warning signs going into the tournament. “The defence was just terrible and a ticking time bomb,” came the verdict, while manager Hansi Flick was derided for his “baffling” substitutions as the game slipped away in the second half. AR

Japan supporters were at it again: not goading Germany fans or chucking cups of delicious Bud Zero into the air in victory. No, they were meticulously cleaning up after themselves at the Khalifa International Stadium after their side’s remarkable win:

Japan’s fans are truly the best.🇯🇵

They beat Germany in a famous win, but before celebrating stuck around at the Khalifa International Stadium to help clean up.👏 pic.twitter.com/sZhNExEDqi

This is nothing new. Japan fans are renowned for giving their side vocal support for 90 minutes (or about 105 minutes at this World Cup), then handing out plastic bags and calmly clearing up all of their rubbish before exiting the stadium. It happened at Russia 2018, after winning their opening match against Colombia and after suffering a heartbreaking 3-2 exit at the hands of Belgium. It’s a habit which stems from Japanese culture, where tidying up after yourself and never leaving a mess is highly important. Of course, there is another theory why Samurai Blue supporters do it.

Japan will beat you and clean up the whole place, leaving the crime scene with no evidence

Switzerland v Cameroon (Group G, 10am GMT, ITV1) A bullish Samuel Eto’o has predicted that Cameroon can win this World Cup but getting out of a fiendishly competitive Group G has to come first. The Indomitable Lions have an attack with teeth – Bryan Mbeumo, Karl Toko Ekambi and Eric Maxim Choupo-Moting – but results this year have been patchy. Switzerland shed their dour reputation at Euro 2020, knocking out France then taking Spain to extra-time before losing 5-3. Granit Xhaka is in the form of his life for a side that pipped Italy in qualifying. With Brazil to come, both teams urgently require an early three points. AR

Uruguay v South Korea (Group H, 1pm GMT, BBC One) Son Heung-min being able to play despite his fractured eye socket is the news every South Korea fan craved. The Tottenham forward is vital to his side’s chances of exploiting any gaps in the defence of a side no longer marshalled by Óscar Tabárez. New manager Diego Alonso has built his team around Real Madrid midfielder Federico Valverde, behind an attack led by Luis Suárez and Darwin Núñez in a combination of great Liverpool strikers past and (possibly) future. Key to stopping them is Napoli’s in-form defensive “monster” Kim Min-jae. AR 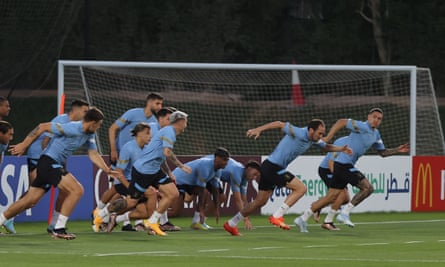 Portugal v Ghana (Group H, 4pm GMT, ITV1) Cristiano Ronaldo has hogged the headlines before kicking a ball in Qatar and, in theory, it should be smooth sailing for Portugal against the lowest-ranked team at the tournament: Ghana at No 61. But while there is a rich seam of attacking talent in this Portugal side – Rafael Leão, Bernardo Silva, Bruno Fernandes – can it thrive when built around a 37-year-old who’s still sculpted like a Greek statue – but now moves as much as one too? For underdogs Ghana, keep an eye on 22-year-old Ajax ace Mohammed Kudus, who might well fancy a run at the 39-year-old Pepe. AR

Brazil v Serbia (Group G, 7pm GMT, BBC One) Tite’s ominously well-balanced Brazil no longer rely solely on Neymar but have forward options from Vinícius Júnior to Gabriel Jesus, Raphinha to Antony. Serbia, however, have attacking threats of their own in the burly shape of two in-form strikers: Aleksandar Mitrovic and Dusan Vlahovic. Not many sides go toe-to-toe in attack with Brazil but Dragan Stojkovic is uncompromising in Serbia’s attacking principles, insisting: “How we win is important.” In an open game, the experience of Casemiro in midfield could be crucial, but keep an eye on Thiago Silva – still a magnificent defender in a three, but perhaps less comfortable in the back four Brazil will likely play. AR

Son Heung-min South Korea’s shining light, now 30, is unlikely to be closer to his peak at this level again, and will attract every lens in the Education City Stadium. He’ll be playing in a sizeable face mask as he ploughs on while still recovering from a fractured eye socket suffered only 23 days ago, and will be advised to double-check the padding before tussling with Uruguay’s nark-adept back-line, particularly Diego Godín. “We will see how it will be,” said his manager, Paulo Bento. “Our hope is that he will feel comfortable as far as possible.” SG

If the action underwhelms, it could still be a big day to treat the coverage as a livestreamed Where’s Wally? of things in tattoos. How many birds, flowers, crucifixes and sets of Olympic rings can you count today? 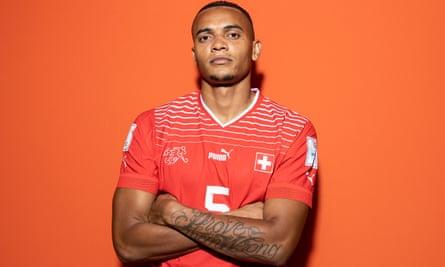 What time does the clock say on Darwin Nüñez’s left arm? And can you spot text taking up more flesh-space than Manuel Akanji’s eye-poppingly large “Prove them wrong”? SG

The Guardian wins newspaper, podcast and writer of the year at FSA awards

Who Are the Lead Contenders in the ‘Brick for Vic’ Campaign?