The ones who have seen Mike White at his highest and lowest are not predicting the Jets have found their savior or that he will take this opportunity and ride it into Canton.

The new Jets starting quarterback — or at least Sunday’s starting quarterback, after coach Robert Saleh announced Wednesday that Zach Wilson has been benched indefinitely — does not have Justin Herbert’s arm or Lamar Jackson’s legs or Tom Brady’s mind. White probably will not look like a superstar beginning Sunday in Chicago.

On a Jets team overflowing with talent, though, a few key figures from his past can envision White, who owns all of three career NFL starts, unlocking the offense’s potential.

“If you have a good team around him and they’re doing their part, he can get it out on time, he can distribute it, he can throw a catchable ball,” Jeff Brohm, White’s coach at Western Kentucky in 2016 and now the Purdue coach, said over the phone Wednesday. “He can be very accurate, and he can take care of the football.

“He’s not the greatest of athletes. So if you got to create some things on your own or he’s got to scramble to make plays, that’s not his strength. But if the others are doing their job and you’ve got the quick passing game and some play action and movement, he’s going to be really good and effective.”

Mike White threw for more than 400 yards and led an upset of the Bengals in his fairy-tale first NFL start last season.Getty Images

The review should sound familiar to Jets fans, who watched White guide their offense to a stunning win over the Bengals last year in which he threw for 405 yards — mostly on short, quick passes that enabled playmakers to make plays — in his first career start. White, stepping in for the injured Wilson, was hurt during the following week’s game and then ineffective in a drubbing against the Bills (throwing four interceptions), after which Wilson reclaimed his job.

Wilson’s stumbles both on the field and off opened the door a second time for White, who will be tasked with getting the ball into the hands of Garrett Wilson and Corey Davis and Elijah Moore and Michael Carter in an offense that could be explosive with the right quarterback.

“The effectiveness of him is he gets the ball out on time, he’s quick,” said Ken Mastrole, White’s longtime personal quarterback coach. “He understands the game extremely well. He can read [defenses]. …He just needs his opportunity.

“He’s not going to try to do more things than he’s capable of doing.”

However, Brohm and Mastrole both said, White is capable of plenty. 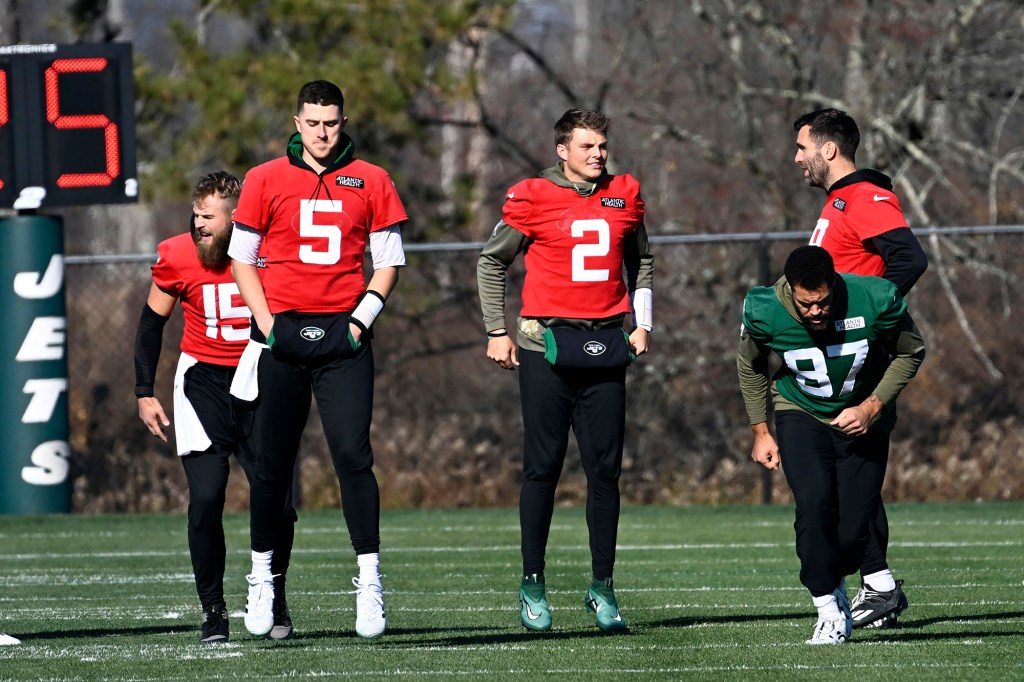 Mike White (5) warms up alongside Zach Wilson (2) on the practice field after replacing Wilson as the Jets’ starting quarterback.Bill Kostroun

A refresher for those who have forgotten the tale of Mike White, who became a brief folk hero last season: White grew up in South Florida, where he was probably a better pitcher than quarterback in high school. Baseball was his first love.

“He was a talented quarterback, and he just never really had any training before,” said Mastrole, who believes he began working with White when White was a junior in high school. The arm strength and accuracy were there, but White had little training for what he was doing with his feet.

White broke out on the gridiron as a senior, which landed him at the University of South Florida. He was up and down for two years then transferred to Western Kentucky.

Under Brohm, Mastrole believes White began truly reading defenses. Playing in a spread offense, White threw 37 touchdowns and seven interceptions as a junior during the 2016 season, culminating with a victory in the Boca Raton Bowl.

“We were at Western Kentucky, and it’s never easy to move up the ladder from there. But he put up great numbers,” said Brohm, who left for Purdue before White’s final collegiate season. “And he did a good job against all the teams we played, even a couple of bigger teams we played, so I knew he’d have a chance [in the NFL]. 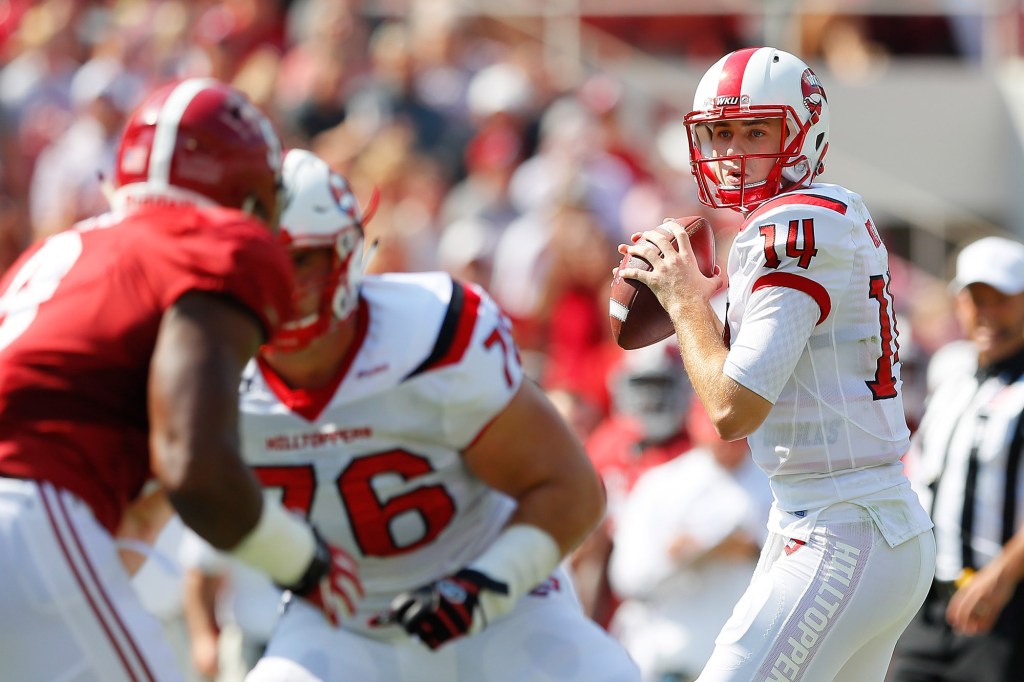 The first opportunity came with the Cowboys, who drafted White in the fifth round in 2018. He made the roster as a third quarterback, but did not step on the field. He was waived in 2019, and the Jets picked him up for their practice squad. He was repeatedly waived and re-signed until he finally got a chance last season and showed the Jets he can manage, if not carry, an offense.

Mastrole, a former University of Maryland and Arena Football League quarterback, suggested the 6-foot-4, not-so-mobile White would have been higher valued a decade or two ago. He said White has been “a little overlooked.”

“You look at the NFL, and it’s changed — a big shift toward the mobile quarterbacks that can make plays with their feet,” said Mastrole, who worked with White in high school, college and some of his professional career. “Now the way the scheme has changed so much … Mike’s not going to break a long run on you or anything like that. He’s going to be that more traditional-style pocket passer.” 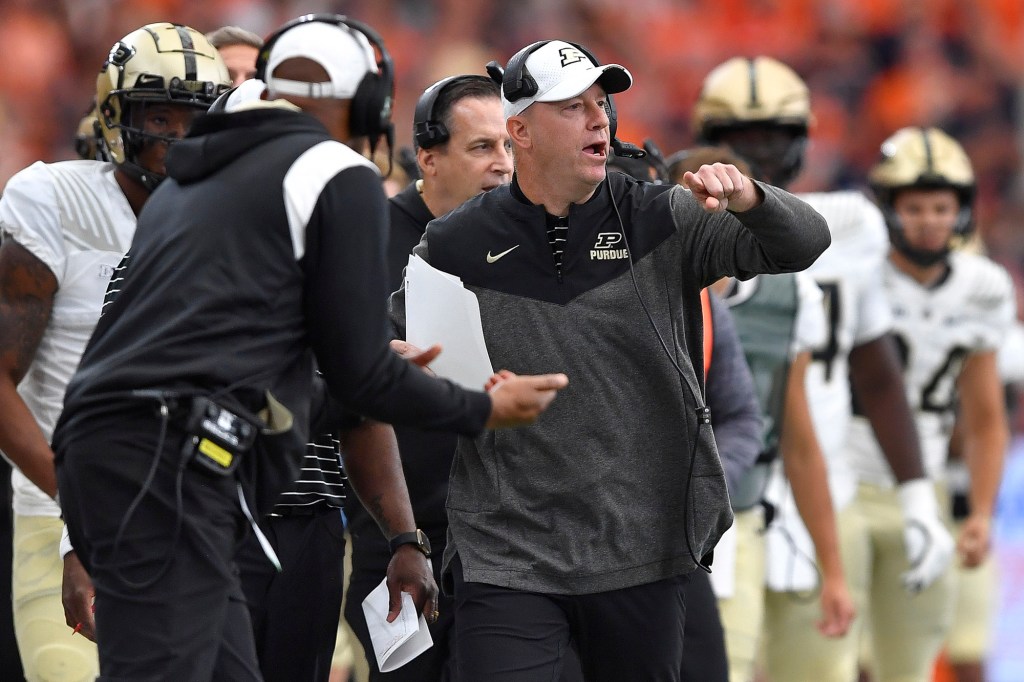 Purdue head coach Jeff Brohm, who coached Mike White at Western Kentucky, said of his former protégé, “He can get it out on time, he can distribute it, he can throw a catchable ball.”AP

The improvisational flair that Wilson showed — which sometimes backfired — will not be seen with White. But White has been adept at making reads, quick decisions and getting rid of the ball.

Is that all the Jets, with plenty of weapons on offense and a tremendous defense, need from their quarterback?

The Jets are fitting their Cinderella with a second glass slipper and hoping a true underdog is the perfect fit. 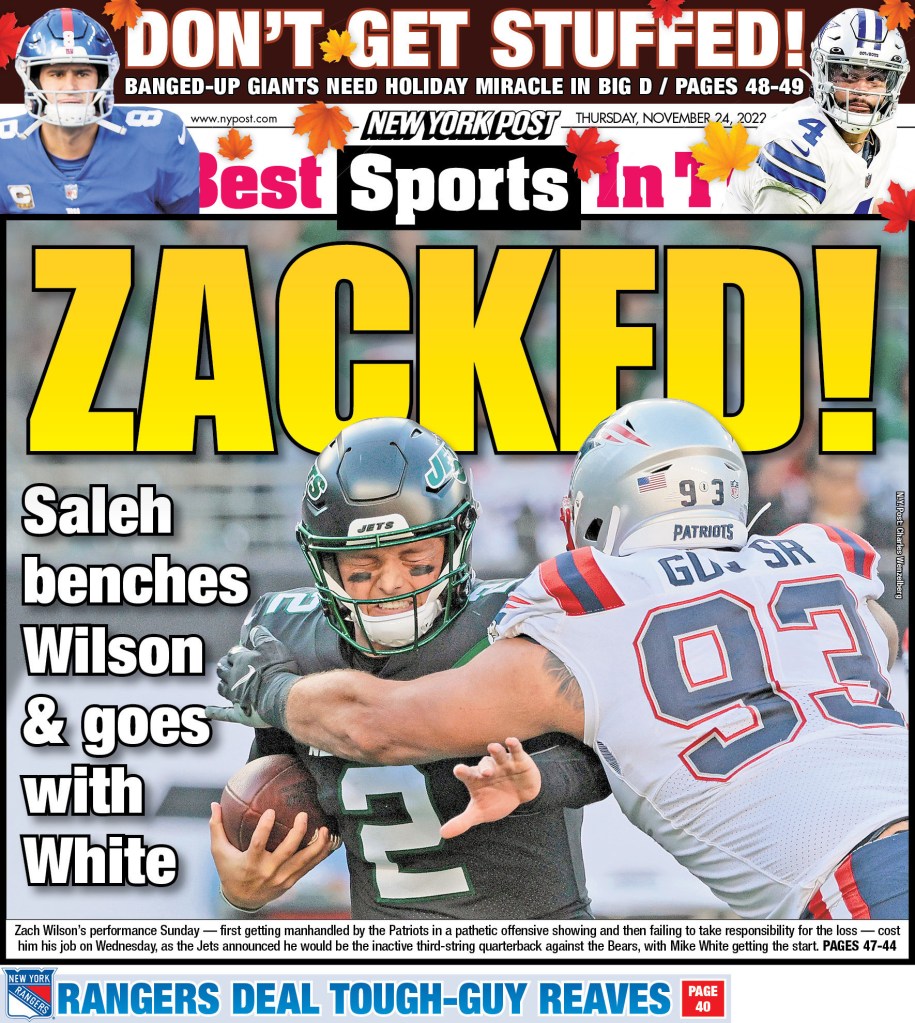 🏀 Kyrie Irving’s decision not to conduct interview with YES irks some at network … Nets 112, Raptors 98

Making a Splash for Judge

One more time, Stephen Curry not landing with the Knicks has come back to bite New York.

As has been thoroughly covered, the Davidson sharpshooter wanted to slip to the Knicks, who held the eighth pick in the 2009 draft. The Warriors did not let him fall past No. 7, and he of course rose to become a four-time NBA champ and the greatest shooter in basketball history.

He’s shooting his shot with Aaron Judge for San Francisco and not for New York. 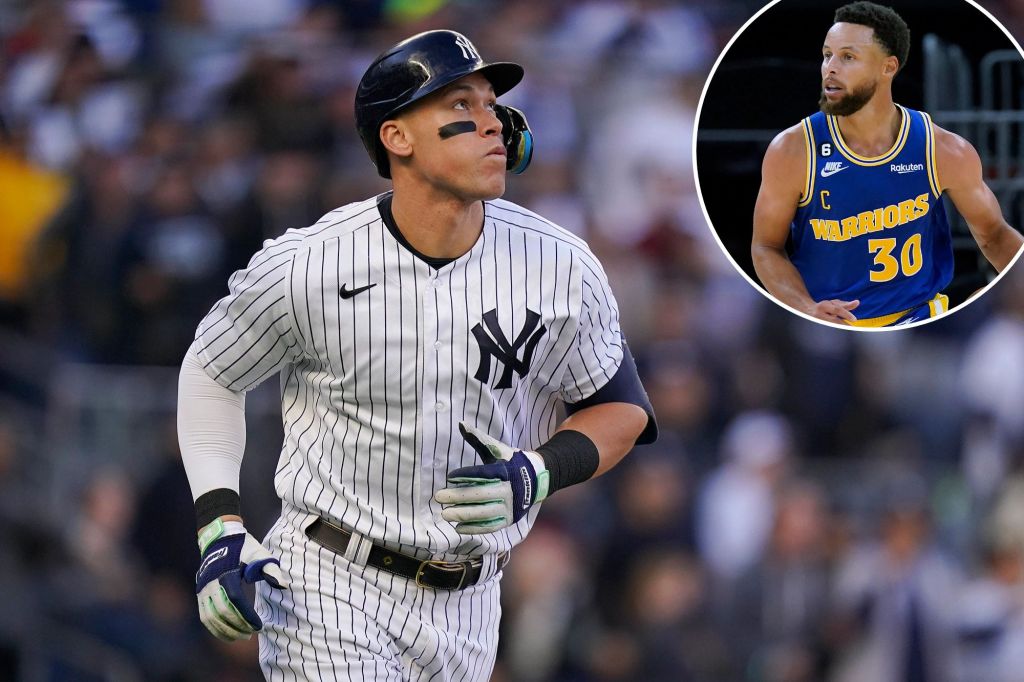 Aaron Judge would join Stephen Curry as Bay Area sports superstars if the Giants can sign the fre-agent slugger.AP (2)

The Giants put Judge in touch with Curry as part of their recruiting pitch, NBC Bay Area reported Wednesday, trying to use one star to lure another. If Judge signs with the Giants, he would play his Oracle Park home games less than a mile from where Curry’s Warriors play at Chase Center.

Also under Giants employment are Barry Bonds (special adviser), whom Judge grew up watching and who he still says is the true home run champion, as well as Willie Mays (special assistant), who might be the one baseball legend the Yankees cannot top. Judge’s childhood favorite player was Rich Aurilia, and it would surprise no one if the Giants trotted out their former shortstop to add to their recruiting case.

Judge met with the Giants on Monday and Tuesday, and probably will be taking a tour to see everything that could be out there — which also would help drive his price up.

Will Curry push him to the Bay Area? Probably not. The money would provide most of the prodding. But if Curry’s pitch did make a difference, Yankees fans can share the misery with Knicks fans that dates back to the 2009 NBA Draft.

Mashed Jones on the menu?

If Thanksgiving comes and goes without Daniel Jones being pasted onto the AT&T Stadium grass, the Giants quarterback should be especially thankful.

The Giants and their depleted offensive line will play the Cowboys on Thursday at 4:30 p.m., when the Dallas defensive line is expected to feast. 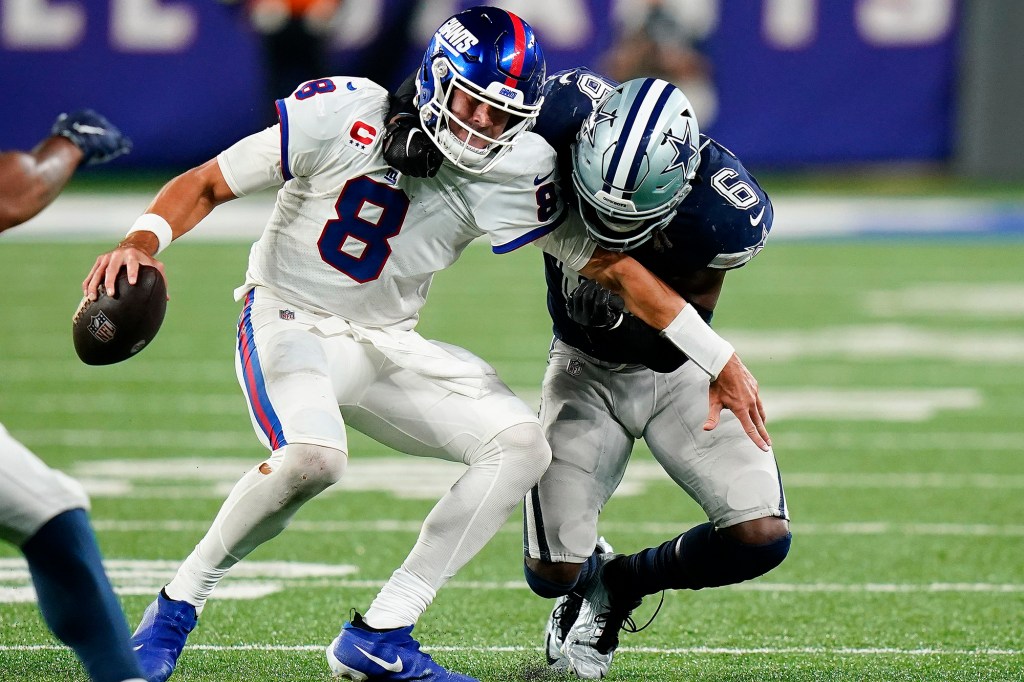 Giants quarterback Daniel Jones will look to avoid a repeat of the beating he took from the Cowboys in Week 3 when he lines up behind a patchwork offensive line on Thanksgiving.AP

On the other side of the ball will be a Cowboys pass rush that leads the NFL with 42 sacks. Micah Parsons (10 sacks) has the third-most in football.

In the Cowboys’ Week 3 win, Jones was sacked five times and hit 12 times — and that was when the Giants’ offensive line was more healthy.

We hope your Thanksgiving will be more fun than Jones’.

Brazil vs Serbia live stream: Where to watch World Cup fixture online and on TV today

Texans’ Lovie Smith on Davis Mills: ‘I am a believer in him and what he’s going to do’