The Boston Celtics once again have the NBA’s largest Traded Player Exception (TPE). This time around, that TPE is worth $17,142,857. It was created in the Evan Fournier sign-and-trade to the New York Knicks last offseason. Due to adjusted calendar mapping (for the last time, hopefully!) this TPE expires on July 18.

Brad Stevens recently said that the Celtics front office has “The OK to do whatever we need to do” as far as spending money this offseason. A big part of that “OK” presumably includes spending most of the Fournier TPE to acquire a player via trade.

A few reminders on how TPEs work and don’t work:

· A TPE must be used before it expires. There’s no extending the expiration date.

· A TPE can be used to acquire one or multiple players, so long as their salary/salaries fit within the TPE amount

· A TPE can be used to claim a player off waivers, provided their salary fits within the TPE

· A TPE cannot be used to directly sign a player

On the last note: you can rule out sign-and-trade transactions for Boston this offseason. As the Celtics are likely to be above the tax apron, they’ll be unable to acquire a player via sign-and-trade.

It’s also worth noting that beyond the Fournier TPE, the Celtics also have two other TPEs that are considered usable:

The list of players we’re going to cover here are mainly targets for the larger $17.1 million TPE. There are 257 total players who will fit within that TPE when the league year changes over to 2022-23 on July 1.

We’re obviously not going to cover all 257 players. But we will cover our top-25 targets for the $17.1 million Fournier TPE, plus a bonus player. We’re also not going to dive too deep into what it would take to acquire most of these players. Assume it would be a combination of draft picks and/or young players to make it work.

Let’s start with that bonus player.

· Evan Fournier – $17,142,857 – New York Knicks: So…this is awkward! Normally, teams are restricted from re-acquiring a player they traded away for one year. Because Fournier’s sign-and-trade happened in-between seasons, that restriction only carried through the prior season, not the prior league year. So, yes, Boston could trade for Fournier via the TPE that was created for him in the first place.

It’s highly unlikely to happen however. Fournier isn’t a perfect fit, plus he carries some extra years of salary that Boston might find onerous. But it is technically possible. The key is this would have to happen by June 30. On July 1, Fournier’s contract becomes too large to fit inside the Fournier TPE and thus, a deal becomes impossible. Clear as mud? Good! Moving on! 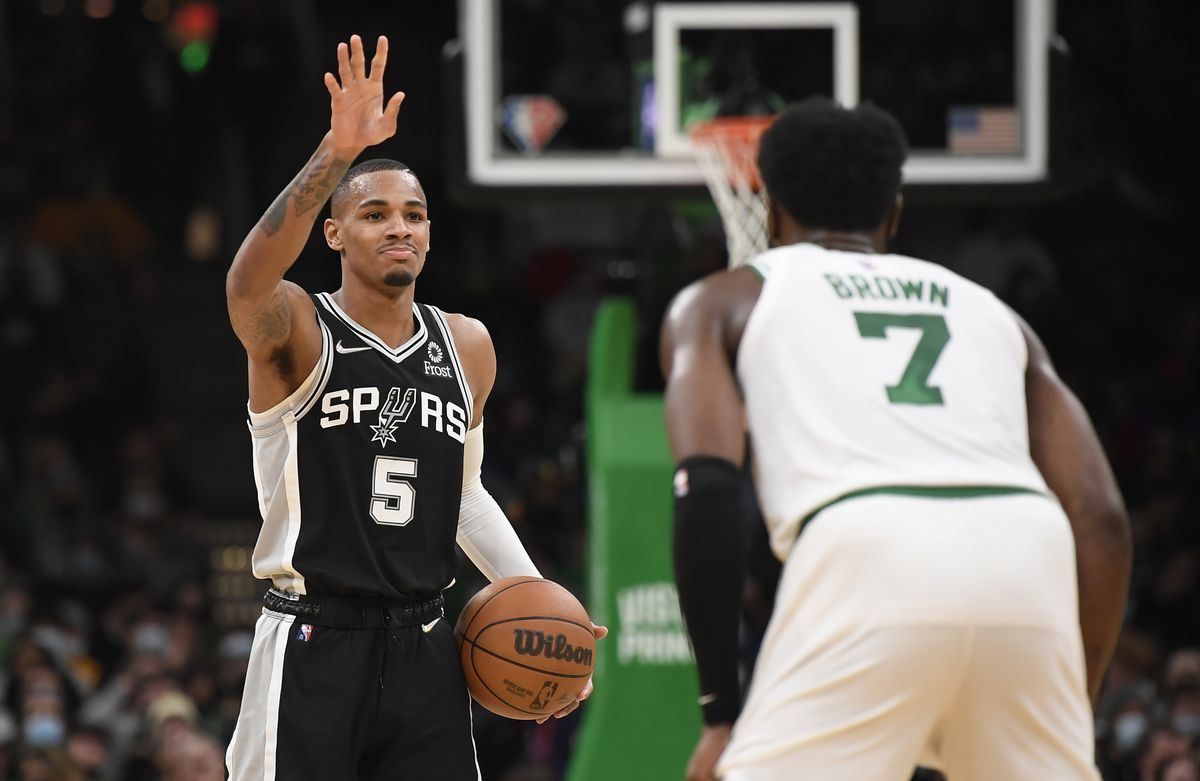 1. Dejounte Murray – $16,571,120 – San Antonio Spurs: Murray is in many ways a dream point guard target for the Celtics. He’s big, he’s excellent on defense and he can’t really shoot a lick. Ok, that last one is a cheap joke. Murray gets by just fine without being able to shoot.

The challenge here? It’s going to cost multiple draft picks to get Murray. Probably three or four, plus maybe some swaps during the intervening seasons, a la Jrue Holiday. Plus, Boston might need to throw in a player or two or three also. But Murray is great and fits inside the TPE amount, so we’re putting him atop the list.

2. Kevin Huerter – $14,508,929 – Atlanta Hawks: The Hawks are reportedly looking to clear salary this summer. Huerter can really shoot it, he has good size, he’s a better playmaker and defender than most realize too. He’d be a terrific fit coming off Boston’s bench.

4. Kyle Kuzma – $13,000,000 – Washington Wizards: Brad Stevens said Boston needs to add some scoring off the bench and Kuzma would fill that need. He’s probably the best realistic scoring target on this list. He’d overlap a bit with Grant Williams, but that can be worked around with relative ease by moving to a three-big rotation with Williams largely playing the four.

5. Cameron Johnson – $5,887,899 – Phoenix Suns: Johnson is one of the few players who makes under $10M on this list. But the Suns are making noise about wanting to lower their likely tax bill, especially if they re-sign Deandre Ayton or take on money in an Ayton sign-and-trade. That could make Johnson (and a couple of other Suns who we’ll cover later) available. Young shooter with good size? Perfect target for even the smaller TPEs. 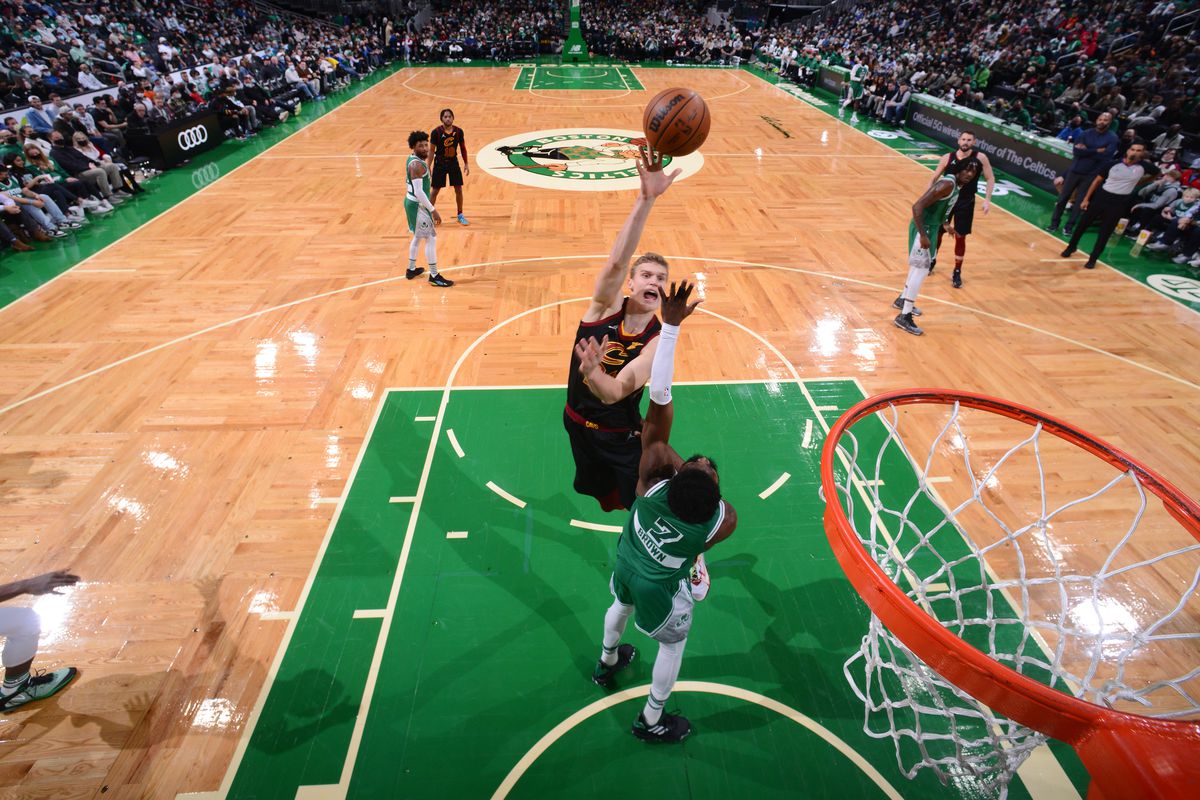 6. Lauri Markkanen – $16,475,454 – Cleveland Cavaliers: If shooting with size is the goal, you can’t get much bigger than Markkanen for a shooter. He’d be a different sort of 3/4, but he held up ok playing the three for the Cavs last season. He should be able to do that again on an even better defense in 25 minutes or so per game off the bench.

7. Duncan Robinson – $16,902,000 – Miami Heat: Robinson is a one-skill player. That one skill, his shooting, dipped enough last season that it didn’t offset his deficiencies in other parts of the game. But if Robinson gets back to being a 40%+ three-point shooter, then you can play him 20-25 minutes a night off the bench without much worry.

8. Kelly Olynyk – $12,804,878 – Detroit Pistons: If the feeling is that Boston can get a wing on the free agent market using the Taxpayer MLE, why not bring an old friend home? Olynyk would fit right into the team’s frontcourt. He’s playable with any of the other Celtics bigs, and his shooting and passing would be a nice addition to that foursome.

9. Jae Crowder – $10,183,800 – Phoenix Suns: Another old friend! And we’ve satisfied CelticsBlog editor extraordinaire Billy Sy’s requirement of some former Celtics on the list! In reality, if Crowder hadn’t fallen off the planet with his shooting last year, he’d be higher on this list because of his ability as a two-way player. But he did struggle to shoot it, so Crowder is down here.

10. Mason Plumlee – $9,080,417 – Charlotte Hornets: Much like Olynyk, this is the direction you go if you feel like you can fill out the wing depth via the MLE. Plumlee can pass, which fits the offense, given Boston’s proclivity to run offense through the bigs. He’s overmatched a bit as a starter, but he’d be plenty solid as a backup. 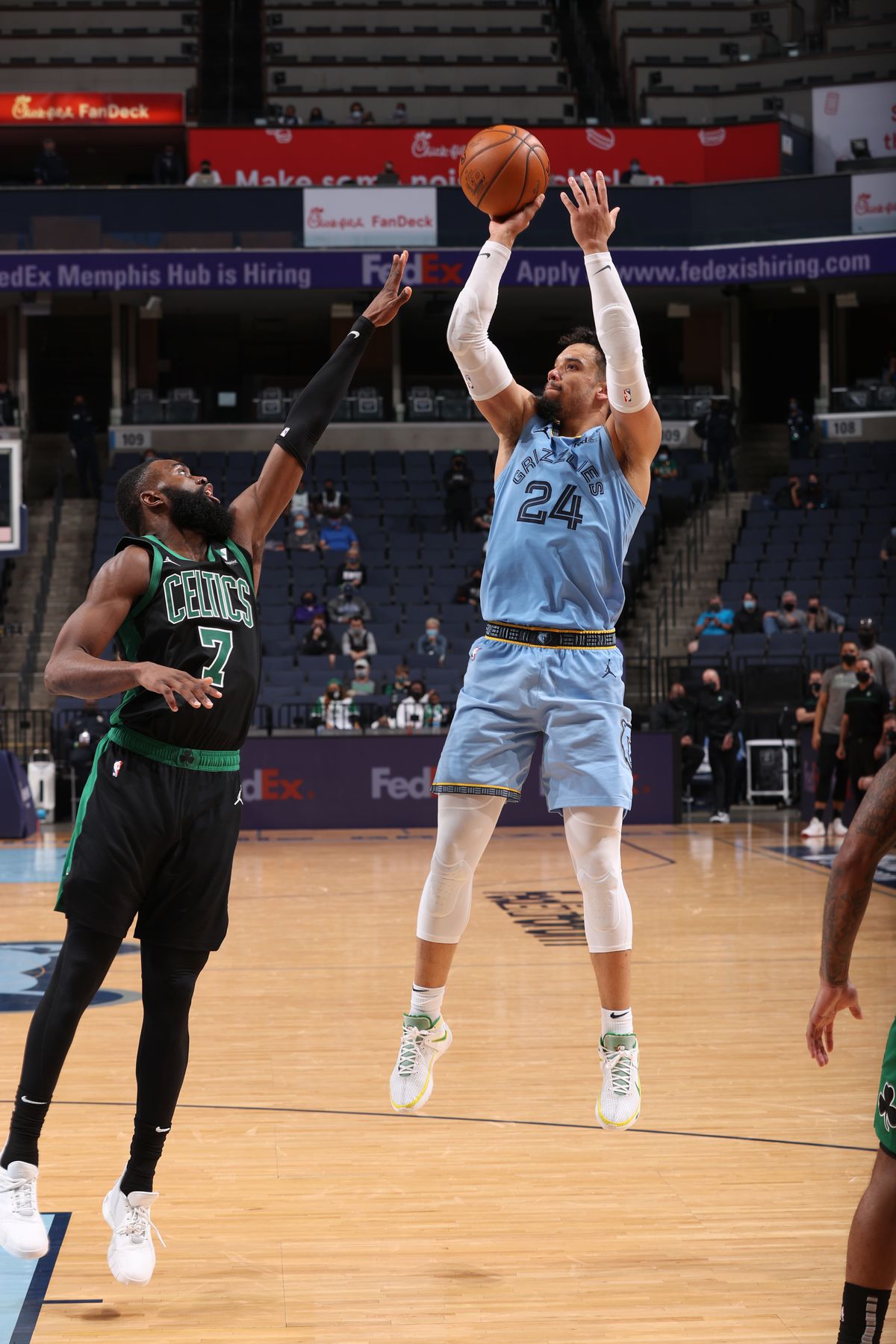 11. Dillon Brooks – $11,400,000 – Memphis Grizzlies: If Memphis were to lose a couple of their free agents, they might pivot towards having a bunch of cap space. One way to increase that space would be to move Brooks without any salary coming back. He’d fill a need as a scoring wing for the Celtics, and his take-no-crap attitude would fit in nicely, too.

12. Doug McDermott – $13,750,000 – San Antonio Spurs: McDermott fills the shooting with size need. He’d overlap some with Grant Williams, but McDermott can generally hold his own at the three, especially against bench players.

13. Kenrich Williams – $2,000,000 – Oklahoma City Thunder: Let’s call this the “interlude” portion of this list. Williams’ salary is so low that anyone can acquire him. But he’s also really tough and can do a lot of things. And OKC is getting tight on roster spots. He’s worth including here, right in the middle of the list.

14. Luke Kennard – $14,415,455 – LA Clippers: There’s some question as to just how available Kennard is. Some say he’s very much on the trade market, while others say he’s not available at all. He’d fill the need for shooting, but he’s strictly a two. So, the need for another wing might still exist if the Celtics traded for Kennard.

15. Richaun Holmes – $11,215,260 – Sacramento Kings: Another big. You know the drill by now. Holmes would be more of a pure backup for Robert Williams, but he’d be a really nice insurance policy behind the oft-injured Lord of Time. 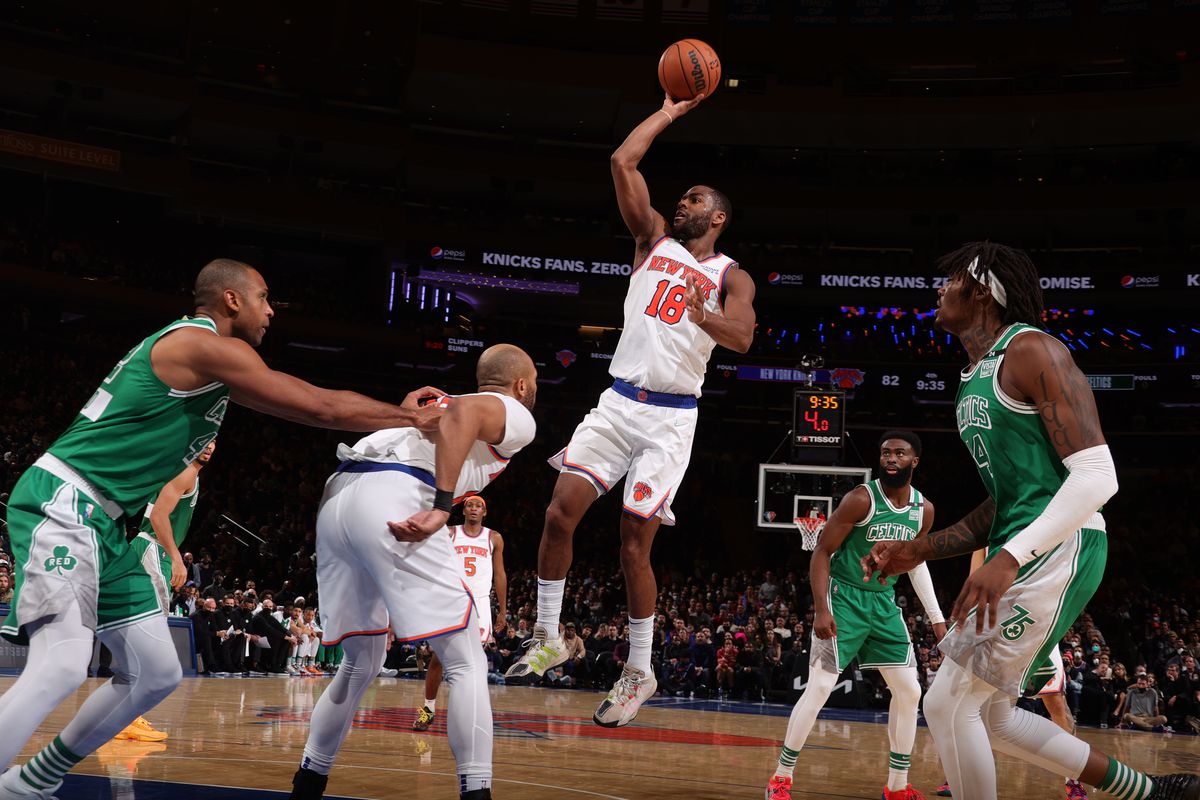 16. Alec Burks – $10,012,800 – New York Knicks: Burks would have ranked higher on this list had he not just undergone foot surgery. He can play 1-3 and do a little bit of everything. But using the TPE on an injured player might not be the best idea.

17. Marcus Morris Sr. – $16,372,093 – LA Clippers: Another old “friend”. Why “friend”? Morris and the Celtics didn’t part on the best terms. But he would fill a need as a 3/4 who brings some toughness. Also, the idea of Morris and Ime Udoka going head-to-head is humorous, yet frightening.

18. Terrence Ross – $11,500,000 – Orlando Magic: Ross is another one-skill player, which basically makes up the rest of the list. The challenge is his one skill of shooting comes and goes. The Celtics might need a little more consistency as a title contender.

19. Torrey Craig – $5,121,951 – Phoenix Suns: This would be a defensive addition on the wing. He doesn’t fit the need for bench scoring, but Craig would fit in perfectly as a switchable defender, plus his deal is pretty cheap, opening up TPE flexibility.

20. Malik Beasley – $15,558,035 – Minnesota Timberwolves: Beasley is one of the better scorers on this list. If it weren’t for some off-court issues, he’d rank a lot higher on the list. As it is, that’s enough of a concern that is pushes him down to this point. 21. Jordan Clarkson – $13,340,000 – Utah Jazz: Clarkson can score, but he’s rapidly declining in his efficiency as a scorer. If you hand him a bench role, you have to live with some mindboggling shot selection, while also giving Clarkson the leeway to cook. That doesn’t seem very Celtics-like, and that’s before you factor in his lack of defense.

22. Nerlens Noel – $9,240,000 – New York Knicks: Noel is a Boston kid and a rumored Celtics target for years. The challenge is that he’s rarely healthy and he’s basically a poor man’s version of Rob Williams at this point. Is that worth spending over half of the TPE on?

23. Derrick Favors – $10,183,800 – Oklahoma City Thunder: We’ve hit the “expendable Thunder bigs” section of the TPE targets. In a weird way, acquiring Favors might signal worry that Rob Williams will be ready to go a full season. But getting an older big from OKC worked out pretty good last year…

24. JaMychal Green – $8,200,000 – Oklahoma City Thunder: Sam Presti already said Green would be traded. He’d cost less than half of the Fournier TPE. But Green is losing his athleticism, and that’s what made him special. Not sure he’s an upgrade over any of the bigs Boston already has.

25. Davis Bertans – $16,000,000 – Dallas Mavericks: A couple of years ago, Bertans would have been a perfect addition as a shooter with size. Now, he’s coming off two down years in a row. He’s basically a one-skill big, who does none of the traditional big man stuff. For basically the same cost, Lauri Markkanen would be a far better addition.

NBA Schedules No Games for Election Day To Encourage Voting