The NBA’s 75th season confirmed what many basketball experts had already believed: Steve Kerr is one of the best NBA coaches of all time.

The Golden State Warriors’ four NBA titles in Kerr’s eight seasons as bench boss (his first coaching gig) are a direct reflection of his free-flowing, yet disciplined approach to the game.

Smart, confident, a gifted communicator, and a savvy X’s and O’s tactician, Kerr owns a .732 winning percentage (No. 1 in league history) in the playoffs ― 93 wins, 34 losses.

A protégé of Phil Jackson and Gregg Popovich ― who also played under Hall of Fame mentors Cotton Fitzsimmons and Lenny Wilkens early in his 15-season NBA career (1988-2003; five titles, three with the Chicago Bulls, two more with the San Antonio Spurs) ― Kerr is an entrenched legend in his own right.

Kerr’s jaw-dropping winning percentage, recorded in an era in which 3-point shooting revolutionized the game, has been achieved, of course, with the otherworldly shooting skills of future first-ballot Hall of Famer Steph Curry setting the tone for the Warriors.

Andrew Wiggins, the No. 1 pick in the 2014 NBA Draft, resurrected his career with the Warriors.

He has great respect for Kerr, one of the NBA’s top 10 coaches ever.

“Man, you’re talking about one of the greatest coaches of all time,” Wiggins declared in the euphoric aftermath of the Warriors’ 103-90 title-clinching victory over the Celtics in Game 6 of the NBA Finals on June 16. “The way he challenges his players but supports them, it’s amazing. He gives his players confidence and he puts his players in a position to succeed. So I’m definitely thankful for Steve Kerr.”

Without hesitation, Kerr will be the first to tell you that everything Golden State has accomplished during his tenure as a coach wouldn’t be possible without Curry in the lineup.

“Steph reminds me so much of Tim Duncan. Totally different players. But from a humanity standpoint, talent standpoint, humility, confidence, this wonderful combination that just makes everybody want to win for him.”

The Golden State Warriors coach also spoke about the overall makeup of the team’s roster, owners Joe Lacob and Peter Guber, and general manager Bob Myers before returning his focus to Curry.

“And I’m obviously thrilled for everyone in that room, and a lot of people had a big hand in this, but I think the thing with Steph is, you know, without him, none of this happens,” Kerr said before adding, “We have had so many great players, but Steph ultimately is why this run has happened. Much like Timmy in San Antonio.

Kerr insisted this is the “crowning achievement” of Curry’s career. It’s also the crowning achievement of Steve Kerr’s coaching career, even though he led the Warriors to five straight NBA Finals appearances at the start of his glorious run with the club.

To return to the Finals with a rebuilt team is incredibly difficult. And it also shows that Steve Kerr knows exactly what he’s doing ― and that he’s one of the top 10 NBA coaches of all time. 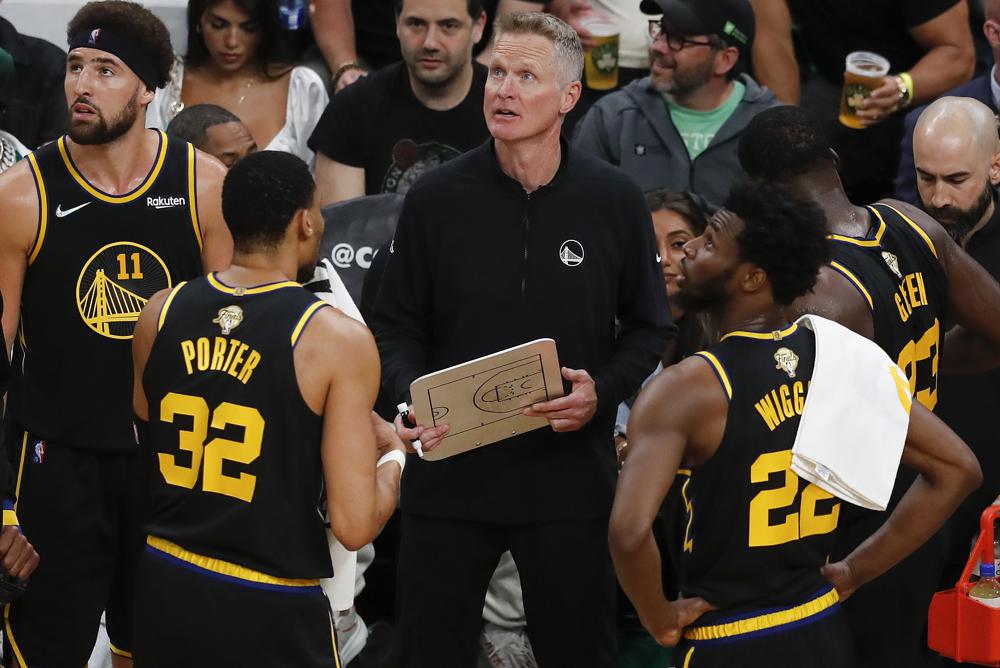 Steve Kerr won five NBA titles as a player, three with the Chicago Bulls and two with the San Antonio Spurs.

During the finals, I reached out to Tom Meschery, a former Warriors forward (1961-67), and asked for his assessment of both Kerr and Curry. He’s an avid follower of the team, a man with an astute understanding of the intricacies of the game.

Meschery dished out the following insight on the coach: “Steve Kerr is brilliant. It does not make sense to me that the NBA awards are presented before the playoffs end as if the playoffs were not a crucial part of the season. (Phoenix Suns coach) Monty Williams did a good job but was upset by the Mavs. Kerr out-coached everybody.”

Meschery on the superstar point guard: “Curry is a magician, a PhD in basketball. I have him in my Top 10 [of all time].” 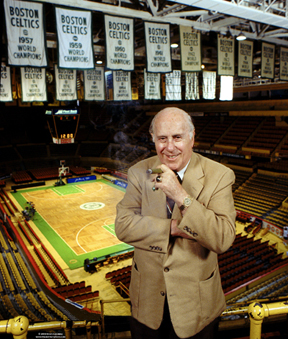 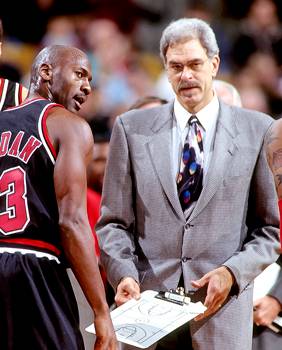 As a coach, Jackson, aka the Zen Master, won an NBA-record 11 championships (six with the Chicago Bulls and five with the Los Angeles Lakers).

Boston icon Red Auerbach, the cigar-smoking architect and masterful motivator of the Celtics dynasty, led the club to nine titles as head coach (1947-66).

Any legitimate ranking of the top-10 NBA coaches of all time would have either Jackson or Auerbach at No. 1. The other spots are somewhat interchangeable, but Steve Kerr is definitely in the mix.

Who are the only other three other coaches who have won five championships (exactly five apiece) since the NBA’s inception?

John Kundla of the Minneapolis Lakers (1949-59 tenure).
Pat Riley (four with the 1980s Lakers, another with the Miami Heat in 2005-06).
Popovich (since his occupancy of the leadership post with the San Antonio Spurs began in 1997).

Other top 10 NBA coaches of all time on this hoop observer’s list include K.C. Jones, Red Holzman, and Larry Brown, with Chuck Daly and Lenny Wilkens sharing a tie to round out the list. Brown and Wilkens both won one NBA title as head coaches; the others collected two apiece. 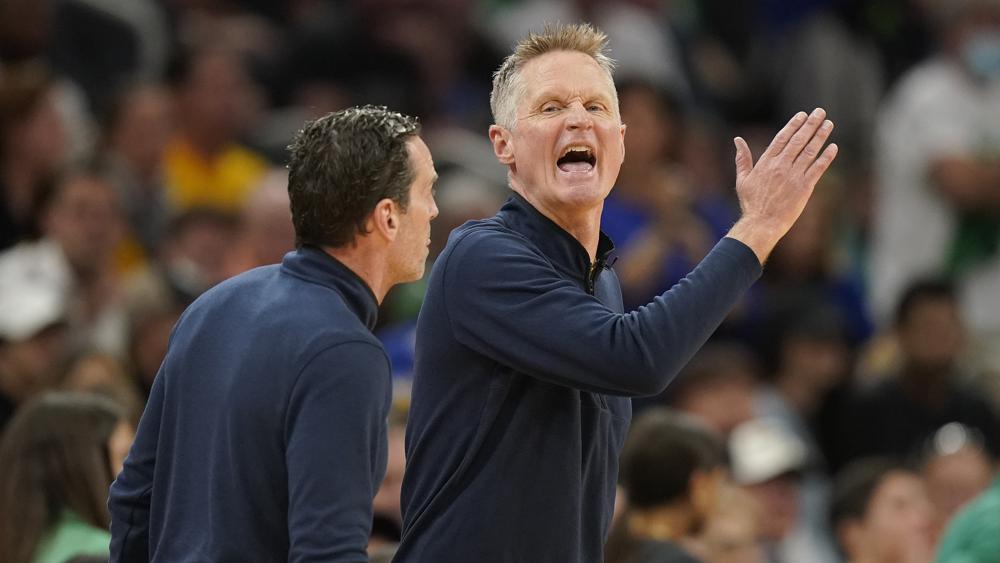 How Kerr returned to the top

Kerr, along with Myers and the coaching staff, worked to rebuild the team’s nucleus after superstar Kevin Durant’s departure to the Brooklyn Nets in 2019. Injuries to Klay Thompson and Curry over the past few years slowed down their rebuilding plans.

But the revamped Warriors’ potential to win it all in the 2021-22 season reached a new high point with Thompson’s return to action in January. What’s more, Klay’s dynamic, inspiring return after a two-year absence supercharged Kerr’s message of overcoming every obstacle in the team’s path to chasing greatness.

He perfectly captured that sentiment after Game 6: “We get to compete in basketball on the biggest stage on earth. That’s a lot of fun. … There’s definitely stress, but that’s all part of the competition. I think none of us would be doing this if we didn’t embrace competition, and part of that is accepting that you might win, you might lose. But being in the fight is something that all of us really relish, and for that reason, this is the best time of the year..” 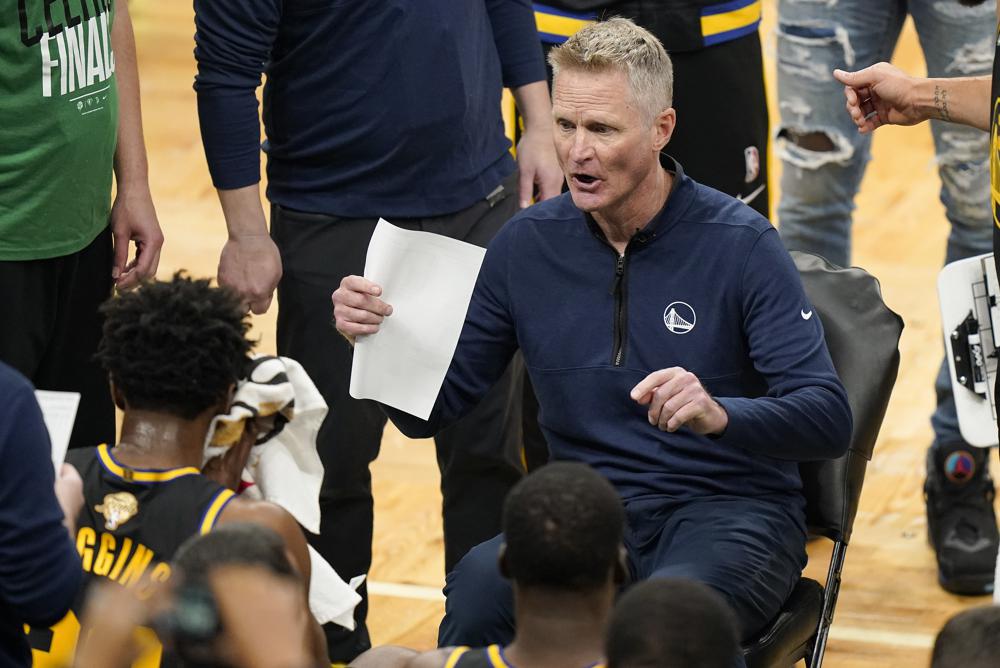 Steve Kerr: A coach with guts

Steve Kerr has demonstrated again and again that he knows what needs to be said to put his players in the best position to win games.

In addition, he possesses a certain fearlessness that dictates his instinctual actions. Case in point: Kerr benched Draymond Green in the fourth quarter in Game 4 of the Finals.

Green and the Warriors, who were trailing 2-1 in the series, capitalized on Kerr’s message-sending move. They played with a sense of urgency in the fourth quarter.

More importantly, they defeated Boston 107-97 and evened the series up.

Of course, one victory doesn’t validate a coach’s greatness. Nor does it cement a player’s status as mediocre, good, or great.

But it was a snapshot of Kerr’s time in the pressure-filled coaching spotlight.

Furthermore, he knows the coach isn’t the only ingredient in a winning recipe. And that’s an important point, too; he doesn’t let his ego get in the way.

The beauty of basketball is that it takes time for guys to grow together,” Kerr said in 2015. “You can’t just throw pieces together like an all-star team and expect it to work. You need continuity and leadership to become great.”

Steve Kerr and the Golden State Warriors are the perfect examples of that.

Cooper legacy to help young Aussies deliver on their potential

Kyrie Hits Back At Reports of Beef with LeBron, Explains How Cavs Departure Really Went Down