When it comes to World Cup preparation, England have been meticulous. With an eye on every detail, from team psychology to adjusting to the heat of a desert climate, Gareth Southgate’s team have left no stone unturned. Except one: they’ve picked the same goal music as Switzerland and Poland.

For some traditional football fans, that blast of music over the PA system that follows a goal is anathema. At the World Cup it’s all part of the entertainment, with organisers FIFA having requested a song from each of the 32 competing nations that might best capture the joy of scoring.

The Guardian has obtained the list of the nominated tracks and it showcases commercial pop music from every corner of the globe; from Canada’s choice of native superstar Drake and his Going Bad to the devotional music of Tunisia’s selection, Muhammed by Adnan Dogru the Balkan reggaeton of Serbia’s selection Preko Sveta by Rasta. England have chosen fan favourite Freed From Desire, a 1997 hit for the Italian singer Gala. The only problem is that the song is so popular the Poles and Swiss have selected it too.

The Three Lions have had occasion to play their goal music half a dozen times so far, while Switzerland have yet to kick off their tournament and the Poles were held to a 0-0 draw by Mexico, whose chosen piece is La Negra by La Hija Del Mariachi. While England have named a backup goal jingle, however – Dua Lipa’s One Kiss – the other two countries have not.

A clash of goal “stings”, as Fifa calls them, will not be the biggest controversy at the World Cup, but music is certainly playing a central role in the tournament. The official song of Qatar 22, Hayya Hayya (Better Together), brings pop stars from three continents together. The US R&B singer Trinidad Cardona, the Afrobeats icon Davido and the Qatari star Aisha share verses on a song articulating a message of global friendship, one of the organisers’ key themes. 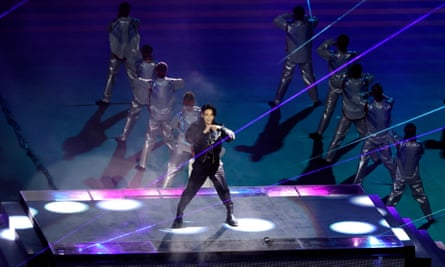 In case Asian fans felt neglected at all, Fifa flew in the K-pop sensation Jung Kook of BTS to perform at the opening ceremony in Doha last weekend. The governing body also claimed a first when they launched an official World Cup playlist on Spotify under the artist name Fifa Sound. Not to miss out, sponsors Budweiser have released their own World Cup song too, a cover of Tears For Fears’ 80s anthem Everybody Wants to Rule the World, performed by the rapper Lil Baby. It has been less commonly heard in Doha than Hayya Hayya.

In another first, live music has also been integrated into the tournament in an attempt, in Fifa’s words, to “reimagine” the fan experience. The Fifa Fan Festival, a 40,000 capacity concrete park in Doha’s West Bay, mixes live screenings of every match with a crowd-pumping MC and a series of live acts, again selected from all over the world. There is a beach festival too, with big name DJs, which fans can pay to access, or get in free if they stay in one of the £175-a-night tent villages.

Australia Down Under – Men at Work

Australia On My Mind – Powderfinger

Germany When We Stand Together – Nickelback

Wales This is Wales – The Barry Horns

The idea of the World Cup as one big party has never been so deliberately cultivated, but football and music have a long history together going back to the days of New Order and John Barnes, or the less artistically relevant 1970 single by England’s World Cup squad, Back Home. The extension of the World Cup experience also reveals an underlying truth, however; that football’s power brokers see a world in which their sport becomes just another strand of consumer entertainment, and they want to make sure they’re ready.