FOXBOROUGH, Mass. — They are fearless and defiant Road Warriors, who revel in turning the roar of the hostile crowd into a whimper, who embrace the sight of star rookie Sauce Gardner parading around Lambeau Field wearing a cheesehead.

But on Sunday, when the Jets’ team bus pulls up to Gillette Stadium, filled with first-place ambition, it shouldn’t surprise anyone if Bill Belichick is standing outside eager to usher the visitors into his longtime House of Horrors.

“A Road Warrior? I feel like when you go to somebody else’s house and take over … kick in the front door, take over,” Quincy Williams told The Post. “It’s like capture the flag, and we’re going to their hood and taking their flag.”

“A Road Warrior to me it’s somebody that doesn’t care about where they go or who they go to play, the goal is the same, and to not let outside elements affect their main goal. And I think that’s something this team does well every single time,” Jermaine Johnson told the Post. 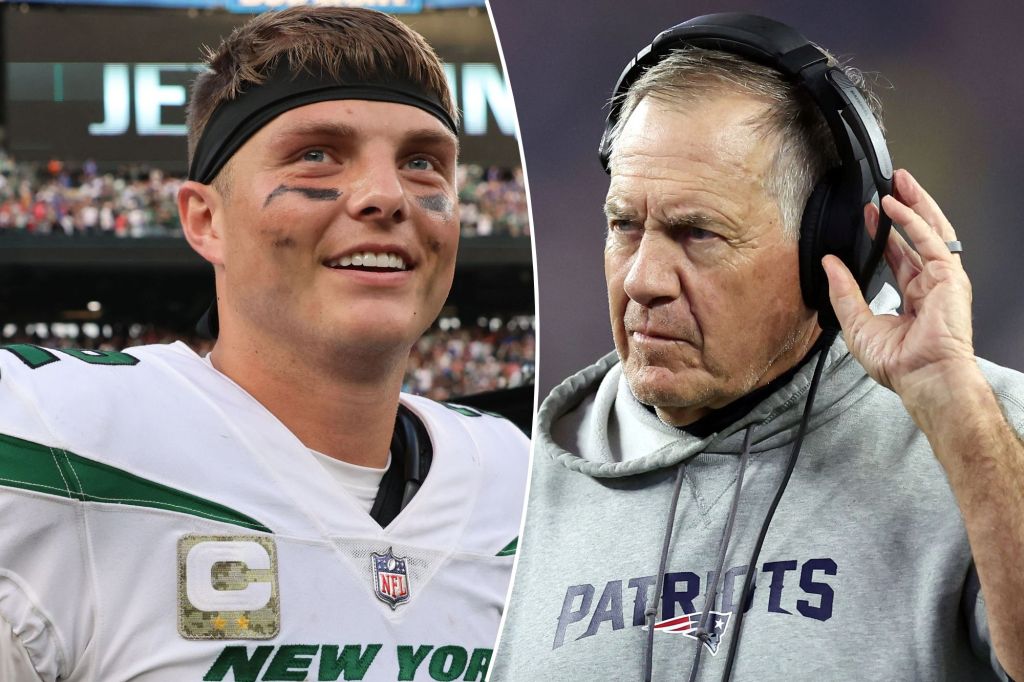 There are few better feelings for Road Warriors than the sounds of silence when they crash the party.

“They’re cheering for their guys, but as a defensive guy, it gets me riled up because it’s like, ‘I can’t wait to hear it go silent like the church,’ ” Johnson said.

“It’s a lot of fun obviously when you’re playing in front of your home crowd and they’re going nuts for you,” Flacco said, “but hearing the silence is pretty amazing, too. If you can go into somebody else’s place and jump on ’em right away, that’s usually a good feeling ’cause then you’re not really dealing with a lot of the things that you’d have to deal with as an offense on the road. If your defense can kinda jump ’em and you can get out to a good start, then you can kinda deal with a pretty quiet crowd for most of the game, which is definitely a little advantage.”

Much has been made of Zach Wilson needing to survive Belichick, but the Jets’ defense, which humbled Josh Allen, will be problematic for Mac Jones.

“Traditionally,” Flacco said, “the reason for it I think people would say is like you pack your run game and your defense and you can go win on the road.”

“My definition of a Road Warrior? The 2022 New York Jets at the moment,” he said, then chuckled. “I don’t know, just someone who has poise in the noise, I think that was something that coaches said [Thursday] that resonated with me. Cancel out kinda the crowd noise and the pressures of the away game, and just kinda focus on your team and yourself, and again, just playing ball with the boys, and I think that’s what we’ve been able to do this year is honestly amazing.”

Patriots fans will spew venom at the Jets. They will mock the Jets. There is no love lost between the organizations or the fan bases, inflamed forever when Belichick resigned after one fateful day — 22 years and six New England Super Bowl championships ago — as HC of the NYJ.

“I love playing at home, like it’s great playing in front of your fans, and heading the crowd and the rush and all that … but playing away is my favorite thing for that very reason,” Uzomah said. “It is great to hear nothing. Like hear a pin drop. I think majority of people I think in the league would agree with me I’d hope. I don’t know if there’s a better feeling.”

Jets players feel they were too consumed with payback for the 54-13 beatdown they suffered last year at Gillette when they lost 22-17 to the Patriots at MetLife Stadium just three weeks ago.

“I kinda think we were,” Williams said, “and just trying to prove a point.”

The Jets believe they are the better team but they know they need to prove it on the field.

“We feel we’re better than everybody,” running back Michael Carter told The Post, “but it’s a matter of going to prove it each Sunday.”

Flacco cited the first time he and the Ravens won in Pittsburgh on a last-minute TD pass to T. J. Houshmandzadeh as his sweetest regular-season road win with Baltimore. His sweetest road playoff win?

That took him to Super Bowl XLVII MVP. The Lombardi Trophy won’t go to the winner Sunday. But to Jets fans, and to an organization that has been treated over and over as the Patriots’ homecoming opponent, a win would feel Super.

First place is on the Jets’ radar.

“We owe them,” Williams said.

Following their loss to the Patriots last month, Jets players told everyone who would listen: “We’ll see them again.”

Wales vs USA prediction: How will World Cup fixture play out?

Jaylen Brown after 37-point performance in loss to Heat: ‘I gotta do...

Jaylen Brown after 37-point performance in loss to Heat: ‘I gotta do more’