The cult of the manager has hit new heights in Cameroon where Rigobert Song’s face stares down from countless roadside billboards and no current national player comes remotely close to rivalling the coach’s fame.

Song certainly exuded a distinctive aura as, fashionably late, he swept into a media theatre in Doha on Wednesday evening. Dressed in a brilliant white tracksuit and with a similarly bright white baseball cap – complete with an outsize peak – crowning his trademark long black dreadlocks, he looked more like a rock star striding on to a stage than a typical football manager.

As the former Liverpool and West Ham defender outlined his hopes for the Indomitable Lions’ opening group game against Switzerland on Thursday an apparently transfixed audience took the opportunity to capture endless pictures of Song and his trademark grey goatee beard on their mobile phones.

Undeterred by Switzerland’s position, 28 places above Cameroon in the Fifa rankings, he was in ebullient mood and suggested a surprise could be in store. “Switzerland will see our fire tomorrow,” he said. “We don’t mind the rankings, they’re just on paper. Who knew Saudi Arabia would beat Argentina? We’re fully fit and focused. Our pedigree will be known tomorrow.”

Poor Samuel Oum Gouet, the 24-year-old midfielder with Belgium’s Mechelen sitting alongside his manager barely got a word in edgeways. Indeed, when a journalist asked Gouet a rare question both manager and player burst out laughing.

After the briefing drew to a close Song stepped down from the stage and stood patiently, exuding charm, as reporters and tournament officials queued to shake his hand, pose for selfies alongside him and have a little chat with a man who played in four World Cups. 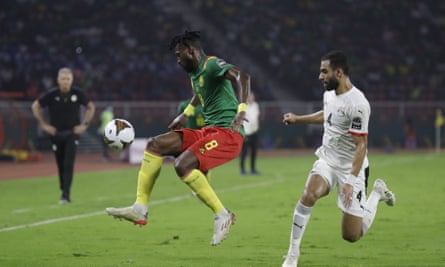 André-Frank Zambo Anguissa, here on the ball against Egypt in the the Africa Cup of Nations in February, is Cameroon’s brightest talent. Photograph: Sunday Alamba/AP

It seemed hard to credit that there was a moment, six years ago, when it all stopped for Cameroon’s manager. At the age of only 40 Song collapsed with a cerebral haemorrhage and remained in a coma for two days.

When he emerged from it doctors at Yaoundé’s emergency hospital decided his brain aneurysm required specialist treatment in France and he spent the next six months in Paris recovering before returning to Cameroon and eventually resuming his coaching career later in 2017.

Fast forward to February this year, and a coach who spent the past five years working with the Cameroon Federation succeeded António Conceição as head coach of the Indomitable Lions.

Although Song’s appointment came after an explicit order from Cameroon’s President, Paul Biya, it seemed a watershed moment for a country who have imported a long line of foreign coaches – Conceição is Portuguese.

Song’s critics, and there are a few, may claim he lacks frontline managerial experience and is overly laid back for the role but the majority appear keen to offer Cameroon’s most capped player the benefit of the doubt. Moreover, that outwardly relaxed demeanour does not, so far at least, seem incompatible with motivating players to hit new heights as they prepare to face not merely Switzerland but Serbia and Brazil in a tricky Group G.

High pressing and attack-minded, particularly down the flanks, Cameroon have, partly thanks to Song’s pulling power, developed a helpful habit of convincing dual-nationals to choose to play for them. In opting to turn his back on France, the country of both his own and his mother’s birth, the Brentford forward Bryan Mbeumo typifies this trend.

“We love music and we like dancing; it’s unbelievable in our dressing room,” says the former France youth international. “It’s so much fun.”

While Mbeumo’s attacking skills enhance Cameroon, their brightest talent lies in central midfield where Napoli’s André-Frank Zambo Anguissa has rediscovered the talent he apparently mislaid during an earlier stint with Fulham.

Part of his brief is to help create goals for Karl Brilliant Toko Ekambi who, despite operating mainly wide on the left, has scored 38 goals in 108 games for Lyon and also registered five at this year’s African Cup of nations.

Tellingly Mbeumo was recruited over dinner in London by Samuel Eto’o who had flown in specially from his Central African home where, as head of Cameroon’s football federation, the former Barcelona, Internazionale, Chelsea and Everton striker is now Song’s boss.

“We go to Qatar to win the World Cup,” says Eto’o, undaunted by Cameroon’s record of having only once progressed from the tournament’s group stage (at Italia 90 when they lost a quarter-final to Sir Bobby Robson’s England in extra time). “The other teams don’t have the same magic as us.”

Although Cameroon qualified for Qatar only by the skin of their teeth, narrowly beating Algeria in a play-off, Eto’o has ramped up by the pressure on Song by suggesting an all African final is possible. “We haven’t always shown our best face at World Cups,” says a man rumoured to sometimes succumb to the temptation to interfere in the manager’s squad selections. “But now African teams are ready. Cameroon will win the final against Morocco.”

At leat Song seems fully on message. “We’re on a mission,” he said on Wednesday. “And we know how to win.”

Blazers vs. Jazz: Start time, where to watch, what's the latest

England’s route to the World Cup final: Who would Three Lions play...

Blazers vs. Jazz: Start time, where to watch, what's the latest

England’s route to the World Cup final: Who would Three Lions play next if they beat Senegal?

What to expect when the 49ers are on defense: Protect the seams and pressure Tua