A little presumptuously perhaps, the Lusail Stadium, the vast and startling mothership of this tournament, insists on calling itself the Iconic. It was the Iconic before the only pre-World Cup event of its lifespan, an awkward test affair where, iconically, there wasn’t enough water. Fair enough. Maybe one day every stadium will be iconic for 15 minutes.

But the Lusail did host an authentic moment here, one of those instantly fixed and screen‑printed Word Cup happenings, a goal for the montage, the expertly sketched animation; and an indicator in its own way that no matter how much you stretch it thin, compromise it, fudge its outline, the World Cup will keep on being the World Cup.

It was the second goal in a controlled, ultimately boisterous 2-0 victory for Brazil; and a moment of fast‑twitch stillness, explosive calm, violent precision.

Vinicius Júnior provided the pass, cutting in from the left. Richarlison was close to the penalty spot. He had enough space to turn and shoot but the ball was pinged a little too quickly at his feet. The first touch took it straight up in a loop, red shirts closing in.

The real magic of the finish that followed was the way Richarlison let the ball drop over one shoulder, then swivelled under its arc, letting it drop out of his line of sight, parabola imprinted on his brain, physics crunched, then turned blind to complete a thrilling mid-air jump-volley, catching the ball flush and sweet to send it zinging into the near corner of the Serbia goal.

It was simply a brilliant finish, a goal created out of the air, and a piece of balletic physical creativity. There was a shout, a roar, a kind of gurgle around the stadium as the ball hit the net, then a writhing sea of yellow in the corner as the players formed a classic bouncing scrum of love.

And this was one of those deep cuts, a World Cup moment people will try to replicate, the Richarlison flip, a sofa-leap finish, a grazed elbow at break time. At this most unreal of global shows, despot ball for the cameras, it felt like a draft of something real.

This was a significant game for Brazil’s attack in other ways. Richarlison was a constant high‑grade pest in the second half, and sharp as a wet razor in front of goal. With Vinícius also playing his part in both goals, the thought occurred: maybe this is the way to get the best out of Neymar.

Don’t rely on Neymar. Don’t let Neymar drag the game his way. Keep a chunk of Neymar in reserve. It felt timely, too. Neymar left the pitch on 80 minutes and later emerged with an ankle looking swollen, limping heavily. After the game the Brazil medical team spoke of a “direct trauma”, result of one of nine Serbia fouls. “Neymar will play in the World Cup,” Tite declared. The good news, for the first time since Neymar began playing World Cups is that it may not be terminal if he is to miss a game from here. 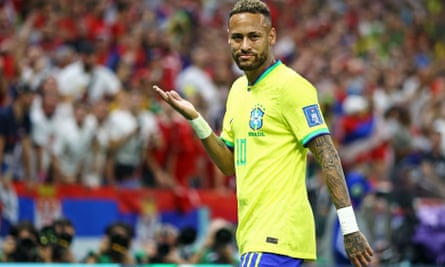 Neymar has said this may be his last World Cup. Photograph: Heuler Andrey/SPP/Shutterstock

And progress also for the man himself. Neymar has spoken about the fact this may well be his last World Cup, that he struggles a bit with these things, that the pressure takes pieces out of him. Perhaps, in an odd kind of way, it is quite encouraging: a reasonable reaction to his unreasonable existence.

Both his previous World Cups have been odd, from 2014’s Jesus complex tournament to the super-brat persona of 2018, when he basically invented a new tactical form, tantrum-ball, Gegen-whinging. Talking about protecting himself: maybe this is a sign of something shifting. Neymar is key for Brazil. But he was also an ensemble player here.

There was a genuine crackle of static inside the Iconic at kick‑off. It is an absurdly spectacular lighted box, another monument to the ghosts of workers passed, to the cold hard edge of Qatar’s will to power. From the outside, it looks like a giant alien potpourri basket. Inside, the stands are so steep you can feel the noise bouncing around, the chill synthetic air spiralling out through the vast and glorious howling-mouth roof hole.

Tite picked an attacking team, with Richarlison and Raphinha ready to track and press while Neymar drifted. It was an odd shape at times, with a high front four and a slightly overworked midfield. Luckily Casemiro has had some intensive training recently in balancing a listing ship.

For a while Vinícius looked the sharpest edge in Brazil’s attack, feet battering the turf, a man who seems to be playing at all times on one of Doha’s endless supply of high-spec moving walkways.

Brazil were cagey in the first half against a strong, organised Serbia team. But Neymar did play the key role in the opener. It was his run, a surge from a standing start, a jink, a stop and a surge past two players that presented the ball at the feet of Vinícius on the left. His low shot was palmed out and Richarlison was there to finish gleefully.

And by the end Brazil were pretty much rampant, pinging in shots, hitting the woodwork, swarming in packs. This was Richie’s day, but also a day to shake a little of the Neymar‑dependência of the past. Icons can be heavy, burdensome things. Brazil looked a little lighter here. They gave us a moment. They looked, by the end, like deserving favourites.

🏅 MOTM: The grand old man does it again for France

🎥 Renard's half-time talk v Argentina will get you out of your...

Today at the World Cup: England look to wrap up place in last 16

Fox, Haliburton Selected as NBA Players of the Week