The Jaylen Brown-Kevin Durant trade saga appears to be in the rear view for now. Multiple reports indicate conversations between the Celtics and Nets never reached a serious point as training camp looms, and it’s hard to imagine the franchise’s focus will remain fixated on the possibility of greener grass once its own players take the court.

The Celtics sat in an enviable, albeit awkward, position over the last month where their nearly unmatched ability to contend for Durant could bolster a team that already made the Finals. If the price stood too high, they could pivot back to a burgeoning trio of Jayson Tatum, Robert Williams III and Brown alongside three excellent guards. The team’s fortunes will now be tied to how much better Brown can become and maybe more importantly, how long he’ll stay.

Brown’s entering his prime in his seventh NBA season, two seasons from free agency, with a few corrections at the edges of his game to square away. He’s nearing All-NBA status and — as the last year’s postseason progressed — showed he’s not too far off from Tatum at his best. That “my turn, your turn” dynamic settled in favor of Tatum expanding his playmaking and Brown embracing a finishing role. Brown focused on scoring and Tatum did it all, turning Boston’s season around. There’s still room for Brown to improve and sneak into the top of the league’s hierarchy with his teammate. It could be key to keeping him in Boston long-term, discovering more of his potential in tandem with Tatum. He’s always known he’s capable of more.

“All-around, the things he does, the versatility he gives us on the defensive end is what it is, I think that trickles down with Marcus and our big wings,” Ime Udoka said. “He’s been solid there and he’s one of the guys who has probably had to restructure what he did as a defender. He’s usually a guy that locks in on an assignment on-ball, off-ball and kind of takes that guy out where we’re asking for more communication and he’s one of the guys that has improved throughout the season as far as that. Offensively … his playmaking ability and his scoring for himself. I think (Game 3 of the Finals) was one of his best games of getting guys organized into spots he wanted, get our spacing correct and then attacking from there … one, two dribbles and finding guys all over the court. That growth, as well as Jayson, was a big point of emphasis coming into the season.”

For Brown to become super max eligible, he’d have to sign an extension with the Celtics next summer and make All-NBA, win MVP or score Defensive Player of the Year honors the following year in 2023-24. There’s some improvement needed for him to break through that can start now, particularly in the ball control category. The league’s incentive structure is built around the elite players in the game. Tatum himself missed super max status (and $25.2 million) by missing All-NBA in 2020-21. Brown signed his last contract for just below the max, subjecting him to a 120% raise if he extends this summer. The designated veteran extension becomes available next year, so he’ll know how close he is to that threshold.

Brown could boost what would start as an approximately five-year, $248.8 million extension into a $290.3 million mega-deal, over $100 million more than he could sign for with a new team in free agency. It’s a serious advantage the Celtics would benefit from if he positions himself to earn all that he can. He’s already have to some degree, with 2022 the most consistently involved he’s ever been in the offense — averaging 24.2 points on 18.8 shots each night after his injury. His 60.2 touches per game were up from 56.9 the year before and 49.0 in 2020.

Brown finished with three All-NBA Third Team votes, 15th among NBA players with LeBron James and Pascal Siakam eventually scoring those honors at forward. Siakam’s presence gives Brown hope, as another player whose name has floated in trade rumors before he found his footing next to a fellow star in Fred VanVleet and scored a career season at 27-years-old; he shot 49.4% from the field, averaged 22.8 points per game, grabbed 8.5 rebounds and dished 5.3 assists per game. 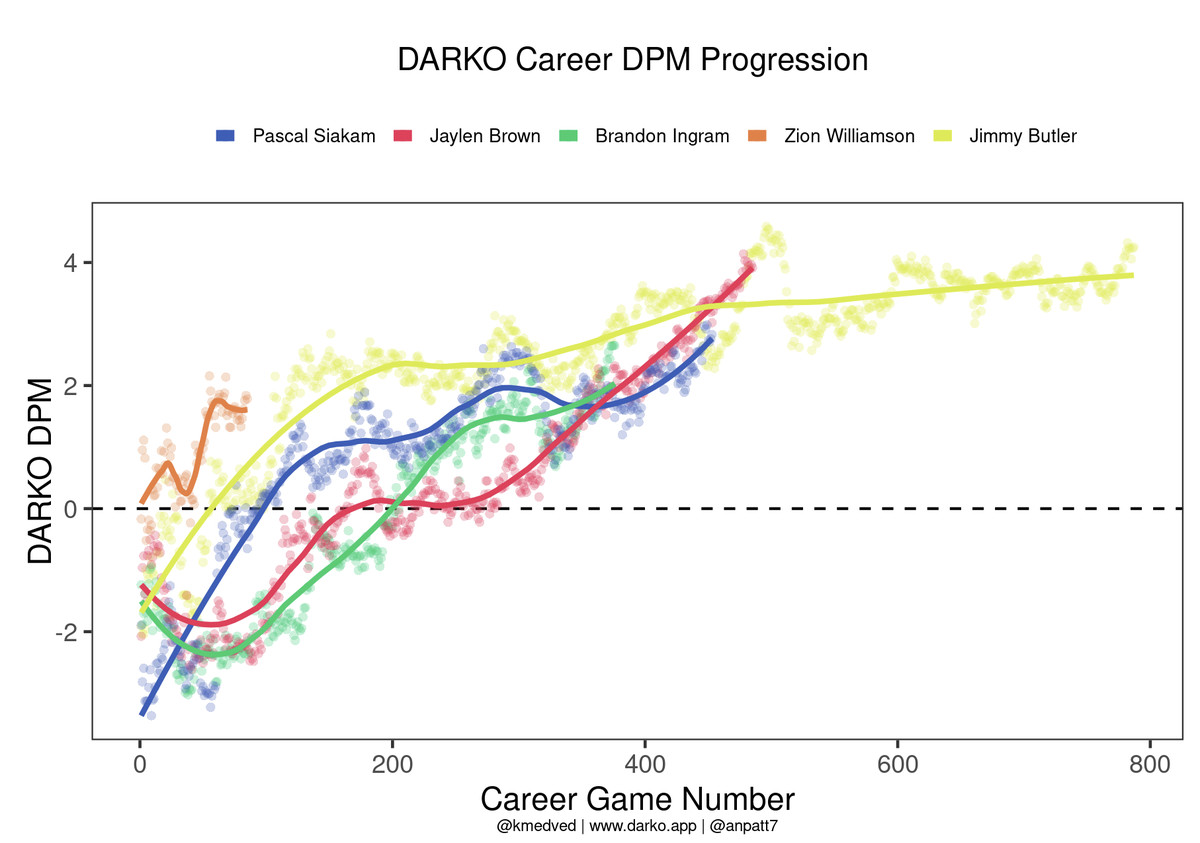 The youngsters are coming though. Expect Anthony Edwards to appear as soon as this year. Evan Mobley and Scottie Barnes could, too, and while unlikely, a rookie like Paolo Banchero or Chet Holmgren could get in the mix by 2024.

Siakam’s wide-ranging impact is one Brown is aspiring to reach. Brown averaging 23.6 PPG, 6.1 RPG and 3.5 APG on 47.3% shooting while only finishing with 66 games due to a nagging hamstring ailment he admittedly came back too soon from. Brown focused on playmaking entering the season, gaining the opportunity to lead bench units and the team as a whole through a winter COVID surge.

The results were mixed. A December win over the Pacers showing his best as a playmaker in the clutch. He also led a comeback effort against Orlando with 50 points.

“I think I’ve made leaps,” Brown told CelticsBlog in December. “That’s something that I’ve watched this summer and really tried to improve at. I haven’t had as many opportunities to be in those roles where I’m the one setting the tone, usually I’m on the receiving end trying to score. As I continue to find different ways on this team to be a threat and to be aggressive, having the ball, bringing it up, running pick-and-rolls, finding guys is something I feel comfortable with.”

He continued to go on stretches of scoring explosions that rival nearly any player, reaching their pinnacle when he bounces around screens to hit successive threes that progressively raise the volume in TD Garden. There’s no reaction quite like the Boston crowd’s to Brown’s runs — they almost need their own nickname.

Brown went on one of them to start the third quarter of Game 2 against the Nets, following his driving layup to finish the first half with a drive-and-kick to Al Horford for three, shooting to the top of the key two plays later to strip Kyrie Irving and bumping him out of the way to draw foul on the way to a transition basket. He sent Tatum out for a dunk plays later after stealing the ball from Durant with Boston finding itself back within two points less than five minutes after they trailed by 10.

Next quarter, after already tying the game at 92 with an acrobatic layup, Brown hit a pull-up three to put Boston up by multiple possessions and send the Garden into a frenzy. He averaged 22.2 PPG on 48.4% shooting through the first two postseason rounds, undoubtedly helped by the pressure defenses send away from him at Tatum, then taking on the role of carrying the offense through dry spells in the later rounds.

His 40 points kept Game 3 against the Heat close until the closing seconds. In Game 6, as the Warriors sped toward a championship following a 21-0 run, he put his head down and made them sweat the entire second half in a 34-point effort. He improved to 23.8 PPG in the Eastern Conference Finals and NBA Finals. Dribbling and tightening his defense up to an elite level are two points that could make him more efficient and increase his scoring and passing output.

Brown often bristled at questions regarding his ball control last year, understandably during a postseason run where Tatum and Smart turned possessions over at higher rates. He emphasized playing aggressively, which would help break the offense open at its most stagnant points, but he also began the season with more turnovers than assists with a 1:1 ratio in the final two postseason rounds. When the point of the double teams Tatum drew came up, Brown would emphasize he also draws extra pressure from defenses.

“I’m being myself,” Brown said in March. “Two back-to-back games where the ball was moving. I didn’t have one assist. People might’ve got on me about that earlier in the season, but playing the game the right way, drawing doubles, making the right plays and the ball is falling in the net. So continuing to be ourselves and play the right way and getting good team wins, and just taking what the game gives you. You can’t control that teams are guarding you certain ways, you’ve just got to play basketball and that’s what we’re doing.”

Some of Brown’s growth will stem from acknowledgement of the holes in his game. He already made some by playing closer to the basket, making himself available for passes more often and bending the defense with up-fakes. Ime Udoka and Brown spent significant time together one-on-one during the COVID surge, breaking down games and trying to bring his playmaking to the next level.

Then, he closed the season scoring 25 or more points in 10 straight games, averaging 28.5 PPG on 55.7% shooting from late March into April. Brown dished nearly two assists for every turnover. It all came together, as it has in spurts, and 3.8 APG over the final 53 games would’ve been his career high.

There’s a world where James, Durant and DeRozan decline lower or out of the All-NBA hierarchy entirely, Brown edges out Siakam and big scoring totals sneak him into an All-NBA Third Team slot next year. The Clippers’ forwards may not play enough games, making it all the more important Brown stays on the floor himself and hammers down some of the defensive miscues that plagued him last season.

The Celtics have emphasized a hot start and few have been better than Brown at those, both in-game and to start seasons. He led the league in points early in the 2020 campaign, another one of his scorching runs.

With a full season closer to that production, he’ll be harder pressed to decline what could be a historic contract from the Celtics. Then, the franchise will have more hope than ever of keeping its young duo together for much of this decade.

Lakers checking in on Eric Gordon

Karl-Anthony Towns on signing extension: 'I love this city. Things will happen this summer'