Mekhi Becton was back on the field with the Jets on Tuesday … sort of.

The third-year tackle reported for mandatory minicamp but worked on a side field with the training staff during the practice. Becton suffered a season-ending knee injury in Week 1 last season, and the Jets are easing him back in.

Becton skipped the voluntary portion of the offseason program as he awaited the birth of his first child then spent time with his son after his birth on May 21.

He is expected to speak to reporters on Wednesday.

It was impossible to judge Becton’s weight by looking at him, but he was one of just two offensive linemen wearing long sleeves during the practice, which is what players often do when they are trying to lose weight.

The Jets’ Mekhi Becton works out on Tuesday.Bill Kostroun

Coaches have said Becton and George Fant, who replaced Becton last season, will compete for the starting left tackle spot with the other going to right tackle. They have not revealed how the competition will be structured in training camp.

“That stuff always plays itself out,” offensive coordinator Mike LaFleur said. “We’ve got a lot of work coming in training camp again. We don’t have the pads on right now. We have two days of minicamp, which is really our OTA practices. There is no run game. That stuff will work itself out.” 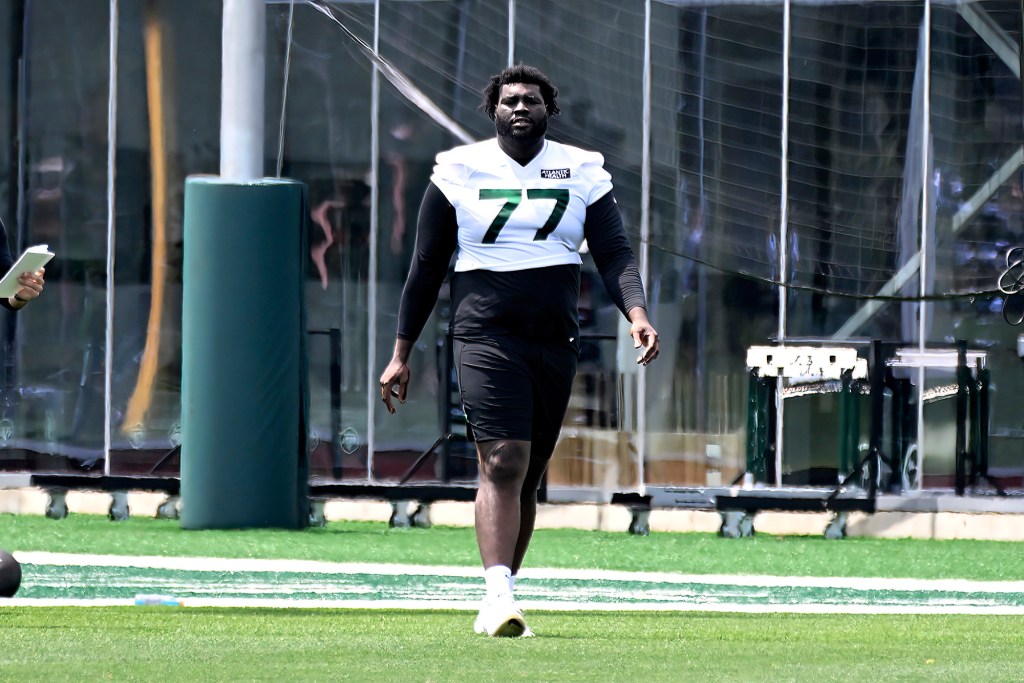 A healthy and motivated Becton could make a big difference.

“He’s a very large man that is hard to run around in the pass game, and then, for being such a big man, he’s got a great first step to get on players and move ’em in the run game,” LaFleur said. “Our scheme or any other scheme, he’s got the talent because of that elite God-given size that he has. The thing for Mekhi is for him just putting himself in the best situation going forward.”

Defensive coordinator Jeff Ulbrich likes the makeup of the 2022 team.

“In my time in the NFL, I’ve never been around a locker room with the character of this group,” Ulbrich said. “It is hard to be an a–hole on this team. It really is. You’ve got a lot of really good guys that love this game. Not only an a–hole, but it’s hard to survive here if you’re not a self-starter and you don’t love this game.”

Ulbrich said the Jets have already started working on the running game of the Ravens, their Week 1 opponent. He said they have gone through 25-30 of Baltimore’s run plays during their walk-throughs. … Becton, Fant, TE C.J. Uzomah, CB D.J. Reed, TE Jeremy Ruckert, LB Jamien Sherwood and DE Carl Lawson were all working on the side with trainers

Which 4th-round pick is holding up a bunch of other NFL rookie signings?