Rain disrupted play on the first day of the Canadian Open Masters forcing Andy Murray’s match against Taylor Fritz to be postponed for 24-hours, was held on Tuesday allowing some measure of catch-up for the organisers

It’s an honour to be on court with Andy. He has been dominating since before I came onto the tour. Taylor Fritz

Unfortunately the delay was of no help for Andy Murray as the 35-year-old three-time grand slam winner crashed out of the event 6-1 6-3 and was clearly frustrated by his performance as he struck struck only seven winners and made 19 unforced errors in the 87-minutes the pair were on court.

Despite his loss, Murray’s presence on the tour still attracts respect as Fritz commented: “It’s an honour to be on court with Andy. He has been dominating since before I came onto the tour.”

Cameron Norrie steps into a backhand in Montreal

But it wasn’t all tears for the Brits as the trio of Cameron Norrie, Dan Evans and Jack Draper successfully negotiated their way past first round opposition.

Norrie bounced back from losing his Los Cabos title in Mexico at the weekend by securing a comfortable 6-4 6-4 win over American Brandon Nakashima.

The world number 11 took just 73-minutes to progress into the second round where he will face the Dutchman Botic van de Zandschulp.

Evans recovered well from losing the second set to sweep past Serbia’s Filip Krajinovic 6-2 1-6 6-0 and progress to meet the Muscovite Andrei Rublev who had a first round bye.

Finally on the British front, Draper is set to face Stefanos Tsitsipas in round two following his comprehensive 6-2 6-3 win over fellow qualifier Hugo Gaston of France.

Attention though, again focused very much on Nick Kyrgios who is currently producing an excellent string of results including picking up the Washington title last Sunday.

The Wimbledon finalist, now ranked 37 following his Washington success, successfully cleared his first hurdle with a 6-4 6-4 victory over Argentina’s Sebastian Baez to set up and intriguing match with the world number one, Daniil Medvedev, who also won a title last weekend, the one in Los Cabos, when he beat Norrie.

“It will be a great test and a lot of fun,” Kyrgios said. “He’s a hell of a player. He’s unorthodox — an animal.

“I want to see where my game’s at so I’ll be giving it my best shot.”

The 27-year-old Australian admitted he was physically OK but had to work to maintain mental strength in the match played only 48 hours after he lifted the trophy in the US capital.

“Physically I feel fine, mentally I’m tired,” he said. “I’ve not had much sleep in the last few days.

“I’ve put Washington behind me already. I’ve not played great in Montreal in the past, so I’m just trying to create some good memories for myself.”

Kyrgios held a comfortable 5-1 margin in the opening set before Baez fought back to 4-5 before dropping the set.

The Aussie managed to stop the rot and left nothing to chance in the second set as he closed out victory.

Kyrgios has now won 13 of his last 14 singles matches and stands 28-7 for this season and looks to become a contender at the forthcoming US Open, the last major of the year.

Earlier, fellow Aussie Alex De Minaur finished off a match delayed from Monday by the rain, winning four of the only five points remaining to add to the misery of home hope Denis Shapovalov 7-5 7-6(4) who hasn’t won a match in 9 events since defeating Rafa Nadal in Rome last May. 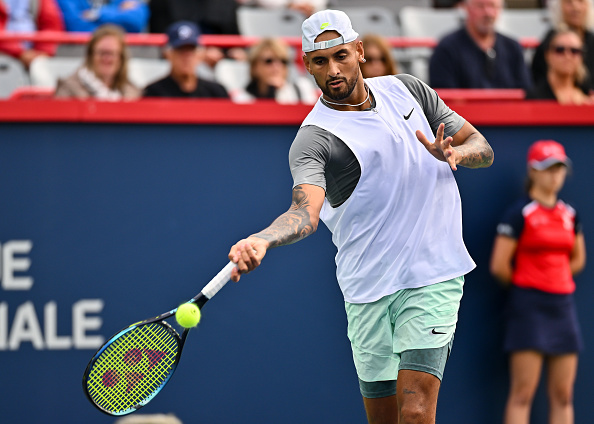 Everything You Need To Know Before Watching New Lakers Documentary

Exclusive: Draper's coach on 'phenomenal' start to year and what's next