So far, 2022 has seen many significant developments in the race for all-time greatness in the men’s game; no longer are the three kings tied at 20 Gradn Slams each.

Rafa Nadal is now the outright leader with 22 overall slam victories after his incredible win at Roland Garros and yet another French Open title.

Despite his many bureaucratic struggles, Novak Djokovic emerged with his fourth consecutive Wimbledon victory, bringing his total to 21 slams, leaving Roger Federer at 20. The slam score now reads Nadal 22, Djokovic 21 and Federer 20.

So as things stand, can we call Nadal the undisputed GOAT with his 22 Grand Slams?

Well, that all depends on what you define as “greatness”. Indeed, the overall Grand Slam win counts, but there are other equally important and objective measurements.

Firstly,  should not the GOAT also be the greatest all-around player (GARP) of all time so that he must have a broad spread of slams and not just all concentrated on one event?

I think so; in other words – would you still call Nadal the GOAT if he had 18 French Opens and only one of each from the rest of the slams? Indeed, that would seem very bizarre, and there is much more to Grand Slam tennis than just the French Open. He’d be the GOAT of the French Open for sure, but the overall Goat? Unlikely.

Yet the reality is not far from this since a full 2/3 of Rafa’s Grand Slams, 14 out of 22, have come solely from the French Open; he only has two French Opens, two Wimbledons, and four US Opens.

That is, of course, very impressive on its own but less impressive relative to the other two kings. Remember, we are comparing the very best to the very best, and standards are incredibly high, with even tiny discrepancies making a real difference.

In contrast, Novak’s record is more impressive (given the GOAT race is very much alive) since in his weakest slam, the French Open, he still managed two wins against the GOAT of the French Open, Rafa himself. The rest of his record shines; 9 French Opens, 7 Wimbledons, and 3 US Opens. That is far more rounded than Rafa.

As is the case with Roger, Though only 1 French Open win, he has reached the final another four times, where again he lost to Rafa. The rest of his numbers are extremely impressive; 8 Wimbledons, 6 French Opens and 5 US Opens, exceptionally well rounded, and he was only prevented from being even more rounded by the GOAT of the French Open.

Ultimately I feel this puts a dent in Rafa’s record in the GOAT race: his lopsided and heavily skewed record towards the French Open hurts him, even though he currently holds more slams than anyone else.

Put it this way, who cares if he won 12, 13 or 14 French Opens? It makes little difference as no one alive will see this record broken; the point is made, any more is overkill, excessive to the end of making Rafa a one-trick pony. 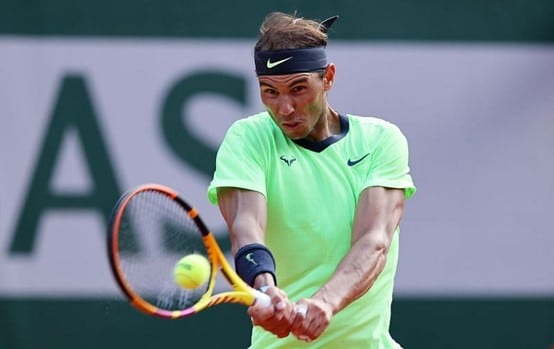 One French Open too many?

That is why I cheered my heart out when Rafa won his 2nd Australian Open after 13 years; that was indeed an incredible achievement, but it sank when he won his 14th French Open straight afterwards. Like I said, the one pony show…

Next is something people rarely talk about – unique records. Let’s start with the more obvious ones; does Rafa have any? Yes, but you guessed it, it’s back to the French Open; he has five consecutive titles and the most French Opens of all time at 14.

Compare this to Novak, with the most French Opens at 9 and 4 consecutive Wimbledon titles.

And Roger? This is where he truly excels; he’s won the most Wimbledon titles at eight and most US Opens ever at 5, including the most consecutive Wimbledon and US Opens at five each.

He also has what nobody has, a chain block of records, which neither Rafa nor Novak has or is likely to achieve.

This is four years’ worth of consecutive back-to-back Wimbledon – US Open victories (2004-07) with a total of 8 slams. I call this the Atlantic Slam!

The last person to achieve anything close to this was Bjorn Borg, who did the channel slam three years running, winning the French Open and Wimbledon back to back (1978-80). That record is still standing after 42 years.

How long will Rog’s four back2back Atlantic slam last? I say at least 60 years. That is some record; it’s almost eternal.

The Greatest All court player?

Last but not least, having discussed that the GOAT should have as wide a  spread of Grand Slam titles as possible, can this not be applied to the GOAT skillset?

That is, the GOAT should have a game that possesses almost every stroke on a GOAT level. If so, don’t Roger’s all-around skills stand out even when compared to Novak and Rafa?

Yes, some parts of Rafa and Novak’s game are on GOAT level, but few would say that Rafa has the best backhand, volley or serve. Neither would you say the same regarding Djoko’s serve and volley or even his forehand.

Roger is different; most of his game is on GOAT level: the forehand, serve, volley, mobility, stamina, and consistency. He does it all:  baseliner, serve + volley, true round greatness. The only exception is the backhand which is excellent but perhaps not GOAT level.

Can this all-court greatness be quantified? I believe it can, to a certain extent.

Take away their best weapons, and what do they have?

Put it this way, if we took away Roger’s serve and gave him something not as superlative but above average like former top ten player Tommy Haas’s serve.

Can you picture him winning many slams? I think you can, not 20 perhaps, but around ten is reasonable and still very impressive. Federer has one of the best of not the best serve ever, but he is by far not a one-trick pony. He could still rely on his other GOAT-level skills to bring home the slams.

However, I don’t think the same can be said for the other two. Take away Nadal’s colossal forehand, and what is he left with that is GOAT class? Perhaps only his movement. Is that enough to win 22 slams, given how destructive a weapon his FH has been on clay? I doubt it; without that forehand, I think his Grand Slams count would have been far less, perhaps even less than 10.

The same applies to Djoko; take away his backhand, then what? He still has incredible defensive movement, but you don’t win slams from being defensive. What if his BH was like Nalbaldian’s? 21 slams still? I think that would be tough.

If there are statistics on this, we would probably find that in percentage terms, there would be far more points won on Nadal’s FH and Djokovic’s BH compared to the rest of their game.

Whereas with Federer, we would find that points were won much more evenly over his entire skillset.

So Federer can be said to be the GARP (greatest all-around player) ever!

But in the final analysis, perhaps we should remember all of them as the GOAT; they are more similar than different. No one else is even close to 20+ slams, and indeed, as a trio, we will never see another like them again, that I’m pretty sure of, and that makes them more than merely “the greatest “; it makes them immortal.