The big guns have returned for Canada at the Davis Cup Finals.

Stars Félix Auger-Aliassime and Denis Shapovalov will lead Team Canada presented by Sobeys into the Davis Cup Finals from Malaga, Spain and the group arrives with ambitions of an international title.

It’s one of the most complete rosters Canada has ever brought to the event.

Let’s break down the team:

22-year-old Félix Auger-Aliassime returns to the Davis Cup Finals and the talented young Montréal native will be counted on as the number one for the Canadian squad and for good reason.

Auger-Aliassime has produced a fantastic 2022 campaign, his best to date.

Félix secured his first career ATP singles title back in February at the Rotterdam Open and has since added three more through the fall swing, playing some of the best tennis of his life.

Auger-Aliassime has been one of the most dominant players on tour the last two and a half months, going 20-6 since the US Open.

That stretch included a 16-match winning streak as he won two ATP250 titles in Florence and Antwerp, the ATP500 Swiss Indoors Basel, and advanced to the semifinals of the Paris Masters.

Now the only challenge is making sure he holds up physically.

“Definitely he’s had an incredible season toward the end of the year,” said Captain Frank Dancevic on Match Point Canada.

“He feels great on court – he’s also played a lot of matches. That takes a toll on anybody’s body, and it’s just about staying fresh, and managing his energy levels going into the tie.”

Auger-Aliassime has gone 57-27 across the busiest calendar year of his career. 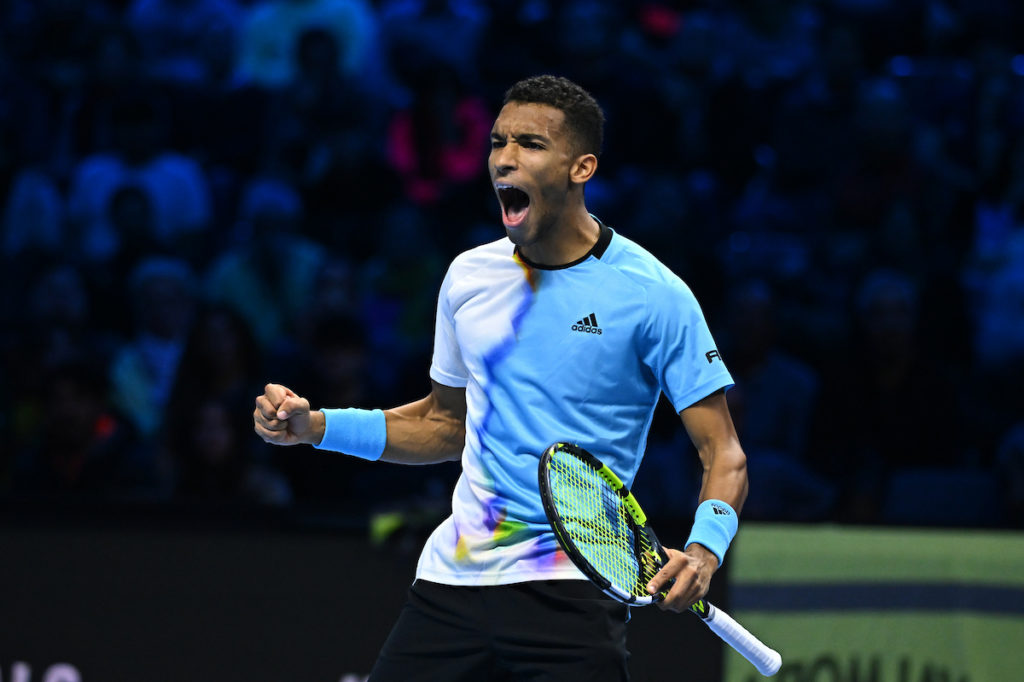 He’ll be relied upon for one final push for Team Canada in Malaga, Spain before getting a much-deserved rest.

Denis Shapovalov makes his first return to the Davis Cup since helping lead Canada to the finals back in 2019.

He also arrives in sensational form and will look to further build upon his outstanding stretch of fall tennis.

Shapovalov began his indoor season by advancing to the finals of the Korea Open, falling in a tight two set final to Yoshihito Nishioka.

He then reached the semifinals in Japan, highlighted by impressive wins over American Steve Johnson and Croatia’s Borna Coric, before going the distance with ATP Finals qualifier Taylor Fritz, falling 6-3, 6-7, 6-3.

In Vienna three weeks ago, he’d avenge his loss to Fritz with a three-set win of his own and run off four straight wins to make his sixth career ATP singles final before falling in the championship match to Daniil Medvedev.

While Shapovalov endured a challenging mid point of the season, losing early at Roland Garros and struggling on the grass court calendar, he’s back inside the top 20 and playing his very best tennis. He’s the veteran stalwart of the group, and Mr. Reliable in Davis Cup play.

Vasek Pospisil will make his 23rd appearance in the international event and arrives to Spain fresh on the heels of a title in Quebec.

Pospisil defeated American Michael Mmoh 7-6, 4-6, 6-4 to win the Drummondville National Bank Challenger and is back inside the top 100 of the ATP Rankings for the first time since November of 2021. In September, he rallied to defeat Seong Chang Hong of Korea 4-6, 6-1, 7-6 in a crucial opening singles match before teaming up with Félix Auger-Aliassime to win in doubles.

Against Spain, he and Auger-Aliassime defeated the powerful Spanish doubles team of Marcel Granollers and Pedro Martinez 4-6, 6-4, 7-5 in the rubber to seal the victory over Spain. Pospisil will be leaned on heavily in doubles but is adept at both.

Laval, Quebec’s Alexis Galarneau received his third nomination to the Davis Cup roster, and it’s well deserved as the 23-year-old continue his steady ascension up the ATP rankings.

Galarneau has achieved a new career high of #204, having recently reached the quarterfinals of the Calgary and Drummondville National Bank Challengers. Earlier this summer, he advanced to the finals of the Winnipeg Challenger, the best singles result of his career.

Galarneau gained invaluable experience back in March as he represented Canada in a tie against the Netherlands, losing a close 7-6, 7-5 match to established top 40 player Botic van de Zandschulp.

Diallo turned heads at the National Bank Open presented by Rogers in Montréal earlier this summer, defeating James Duckworth in a first round qualifying match.

He’s since won the first ATP Challenger title of his career, capturing the trophy in Granby, and last month advanced to the finals of the Fairfield Challenger in California.

Diallo has now achieved a career high ranking of 224 and will finish up his senior year at the University of Kentucky. Canada opens its Davis Cup Finals this Thursday against Germany.

You can watch coverage of the event on Sportsnet.

Murray withdraws before Djokovic match due to food poisoning

U.S. Open draw: Medvedev with Kyrgios and Tsitsipas, Alcaraz in Nadal’s half

Bills vs. Patriots: How to watch Week 13 matchup

Bills vs. Patriots: How to watch Week 13 matchup

The Splash Zone 12/1/22: Terron Armstead could play Sunday against 49ers

TV distribution map: Don’t expect to see Lions vs. Jaguars out of market