There’s more than one way to skin a cat.

While a frequent complaint about the NBA on-court product is homogenous styles of play, roster construction in the league is anything but. Front offices and executives try several different ways to build their ideal team. From positional differences to skill overlap, free agency to the draft, there is real joy to be found in seeing a front office not only acquire superstar talent, but figure out exactly how to maximize the group around them.

Over the last five years, the hard part of the equation was completed for the Boston Celtics. They got their superstars, and did it through the draft. Jaylen Brown and Jayson Tatum, selected in back-to-back drafts, have become All-Stars and cemented their spots atop the pecking order in Boston by leading the Celtics to the 2022 NBA Finals. Brown is only 25, and Tatum is 24. If history for other stars is any indication, both will be in their primes for the better part of the next decade.

Outside of acquiring talent and keeping them happy, front offices have to do some salary cap gymnastics, tucking and dodging the luxury tax and playing within the rules of the CBA to build a competitive team around those stars. Tatum and Brown, both signed to max deals at the moment, will combine to make $59 million next year, according to Spotrac. That figure will jump to $63.3 million next year, the last year Jaylen is under contract before he’s able to negotiate a large spike in his deal. In order to keep these two together, the Celtics will need to either spend well into the luxury tax or find ways to nail cheap contracts on the margins of the roster.

Fourteen months ago, Brad Stevens slid into the main front office chair, taking over for Danny Ainge as President of Basketball Operations. Stevens’ first move of consequence was to package their 2021 first-round pick with Kemba Walker to get Al Horford. Many saw it as a cap-driven move at the time, exchanging the overpaid Walker for a better deal and giving up a late-first as the cost of doing business. Horford ended up being a major on-court acquisition and an ideal role player for the roster.

At the 2022 trade deadline, Stevens was at it again, dealing their 2022 first-rounder to San Antonio (along with Romeo Langford and Josh Richardson) for Derrick White. White, an underrated role player stuck in a backcourt logjam in San Antonio, was another veteran piece who could provide some backcourt depth for the Celtics, who never found the right replacement for Kemba. White proved to be all that for the Celtics, coming up huge in the postseason and blending in perfectly with their already-established core.

Part three of the ‘Stevens trades a pick’ saga unfolded with the Malcolm Brogdon acquisition. On its face, Brogdon is the best player Stevens has acquired in his time as Celtics general manager, and it only took one piece of draft capital (a 2023 first-round selection) to pull it off. Also included in the deal with Indiana were salary fillers (most notably, Daniel Theis and Aaron Nesmith).

Almost fourteen months in and Stevens has seemingly punted on the draft for his first three years on the job. Some cap specialists may worry about an eventual shortage of cheap contracts with team control. Grant Williams is due a new contract next summer. Once that happens, Payton Pritchard will be the only first-round pick made by the Celtics still on the roster.

But that’s not necessarily a bad thing. Stevens has already shown, with the Horford, White, and Brogdon trades, what his pathway forward is to constructing the roster. 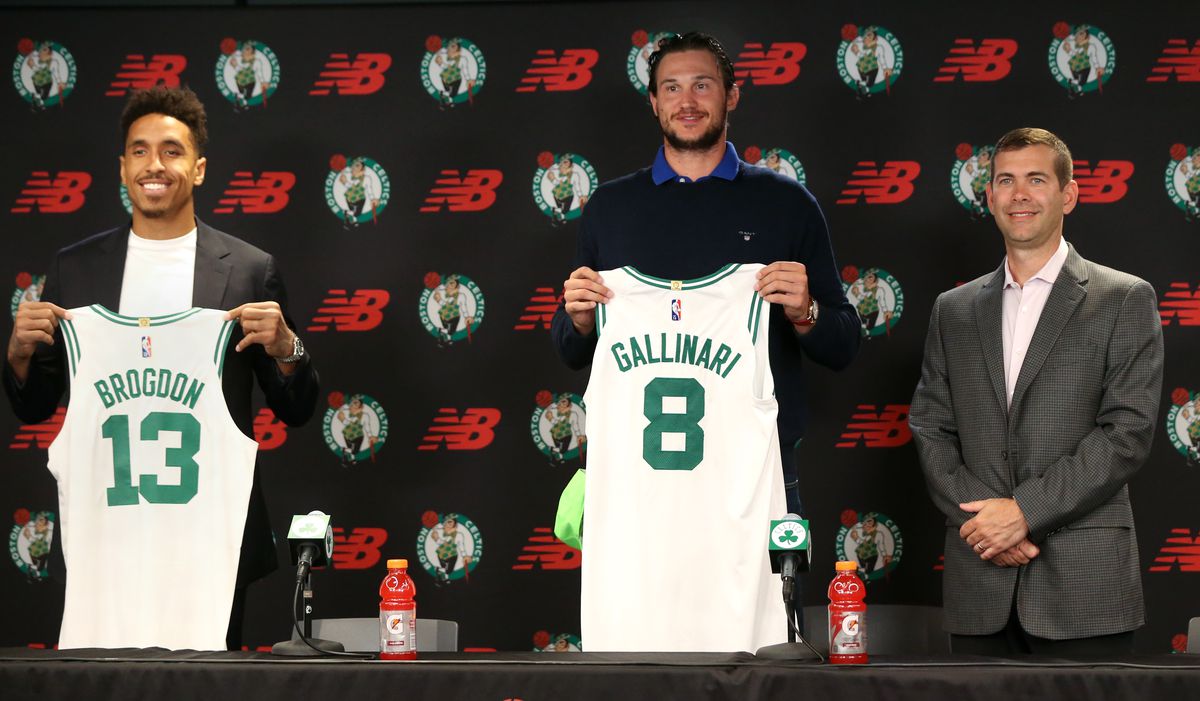 The first step is keeping flexibility on the back end of the roster. Throughout the regular season, that flexibility will allow the Celtics the ability to add the right end-of-bench pieces based on who is available and what their team needs are. The players they do add can be veteran retreads (like Nik Stauskas) or younger standouts from the G-League good enough to be on a roster (like Malik Fitts). The C’s can easily swallow one of their contracts if the right veteran comes available on the buyout market without disrupting the long-term plan.

The key for Stevens is to sign each player to an additional year of non-guaranteed salary. That mechanism allows the Celtics to bundle those pieces together for a summer trade (as they did with Fitts, Juwan Morgan and Stauskas) to acquire a better role player.

Giving an extra year on the back end of the contract gives them team control in a new cap year, but is designed to circumvent Stepien rules that dictate the trading of draft picks. Under the Stepien rule, an NBA team cannot trade future first-round draft selections in consecutive years. When the league year rolls over into July, though, that clock resets.

This year is an example of how that works out. At the deadline, because the Celtics traded their 2022 first-round pick for White, they could not deal the 2023 pick until after July 1st, 2022. Once the new league year started, making such a deal is back on the table. We could see the same thing next year: Boston has no 2023 pick, so they cannot deal the 2024 selection in any mid-season trade. Next July, that restriction disappears.

Stevens is likely to fill out the rest of the roster this summer with some G-League standouts, minimum veterans and intriguing young players. Look for them all to be given a two-year deal with the second year fully unguaranteed, just for the purposes of using them in a trade down the line.

With the roster getting more expensive in the coming years due to the impending free agency of Grant Williams and Al Horford, plus escalating salaries for their contracted players, the appeal of keeping team-friendly salaries is important. But a first-round pick is only one way to get a cheap contract.

As the Celtics stay good (or at least plan on being good in the Tatum and Brown years), the value of a first-round pick isn’t that great. Most selections for them will be in the twenties, and it’s awfully hard to find early-career impact rookies in those spots. We’ve already seen the perils of trying to develop talent while chasing a championship; Nesmith and Langford were casualties of not having a longer leash to play through the mistakes and lacking the polish to play without making them.

What’s more, those future first-round picks can be utilized to help get off a contract down the line. As the C’s accrue expensive players, the luxury tax’s repeater penalty could breathe down ownership’s neck to trim one or more of those costly role player contracts. First-rounders are great sweeteners in deals for any team taking money off their hands, and can help create trade exceptions for the Celtics if traded to the right team with cap space.

The point here is this: while the roster gets more expensive, don’t assume that the remedy to those expenses is keeping control of our own first-round selections. Yes, first-round picks are cheap and have value as a result. But the Celtics can find better uses for them to help acquire role players, offset expensive contracts, and keep the title window open over the long term. If I were a betting man, I’d think it’s going to be a while before the Celtics are making another first round selection.