Novak Djokovic continues to astound the tennis world with his statistical records, an unassailable baseline game and superhuman flexibility.

But despite all his success, he has come up against significant obstacles threatening his domination of the professional tour in recent years.

Either through bad luck, the decision of tournament directors and governments, or his own fault, Djokovic missed the chance to participate at four grand slams in which he had a substantial likelihood of winning – Wimbledon 2020, the US Open 2020, the Australian Open 2022 and the US Open 2022. Here we examine why Djokovic was denied victory, why he was likely to win, and what impact it had on the tour.

Remarkably, after all the upheavals of a global health crisis, only one of the four grand slams of 2020 was cancelled. With the World Health Organisation declaring the Covid-19 outbreak a pandemic on 11 March, the Australian Open had time to put on a successful tournament without any of the mask-wearing or social distancing to come.

Later in April, as the UK emerged from its first national lockdown, the All England Club cancelled Wimbledon.

Restrictions would hamper preparations, while the thought of large public gatherings caused alarm. Not only was this a shock for Djokovic, it naturally affected the whole potential draw.

If Djokovic had played that year, in all probability, I think he would have won. His victories at the tournament substantially envelope that missing Wimbledon year, winning in 2018, 2019, 2021 and 2022.

Clearly, during this time, Djokovic was on a hot streak at the tournament, while repeat success had cemented his belief about victory there.

Not to mention that Roger Federer – the only other player that could claim mastery on grass and rival Djokovic on that surface – was out of the picture due to surgery.

In retrospect, a 2020 Wimbledon victory could have eventually levelled Djokovic with Federer’s five-time consecutive record and Nadal’s record of twenty-two grand slams.

Yet just a few months later, Djokovic’s high chances of winning the US Open came crashing down dramatically. Bad luck and an angry flick of his racquet cost him another major title.

In the Round of 16 against Pablo Carreno Busta, Djokovic could not convert three set points at the start of the match during 5-4. Busta began to catch up with Djokovic and held serve for 5-5.

At 15-40, Djokovic pushed Busta deep behind the baseline and tried to cause further difficulty with a drop-shot. However, Busta managed to reach the ball after a daring sprint and let it slide past Djokovic for an angled winner, hitting the right far-side line.

Frustrated at losing serve, Djokovic took a ball from his pocket and, without looking, accidentally hit a line judge’s throat.

A concoction of anger, lack of awareness and the unfortunate positioning of the judge led to a grave situation in which Djokovic tried to reason and argue his way out of discussions with the tournament referee.

After the disqualification was issued, the Serb immediately packed and left the tournament, wanting to remove himself from an epicentre of drama physically.

Looking at what became the quarter-final draw, it is reasonable to suggest that Djokovic would have probably won here. Apart from Busta, there was also Denis Shapovalov, Borna Coric, Alexander Zverev, Andrey Rublev, Daniil Medvedev, Alex de Minaur and Dominic Theim.

None of these players held a grand slam, and only one – Theim – had appeared in a grand slam final and lost to Djokovic in Australia that year.

Moreover, Djokovic had a winning head-to-head record against six of the eight players. Rublev and de Minaur had not faced Djokovic but were substantially out-ranked by him.

Of course, there were consequences to the grand slam count, but more interestingly, the broader implication was that a brand-new major champion would be crowned.

They would also become the youngest because all active major champions were in their thirties at the time.

Since Andy Murray’s 2016 Wimbledon run, it would be the first time the winner of a grand slam came outside the big three.

At the time, it seemed nothing could top the catastrophe of Djokovic’s 2020 US Open run until the Serb came up against the Australian government in an almighty clash.

In November 2021, local Victorian officials with Tennis Australia mandated that players must be vaccinated, with very few exceptions.

Triumphantly on 4 January 2022, Djokovic posted on Instagram declaring that he could participate in the Open, having been granted a medical exemption. 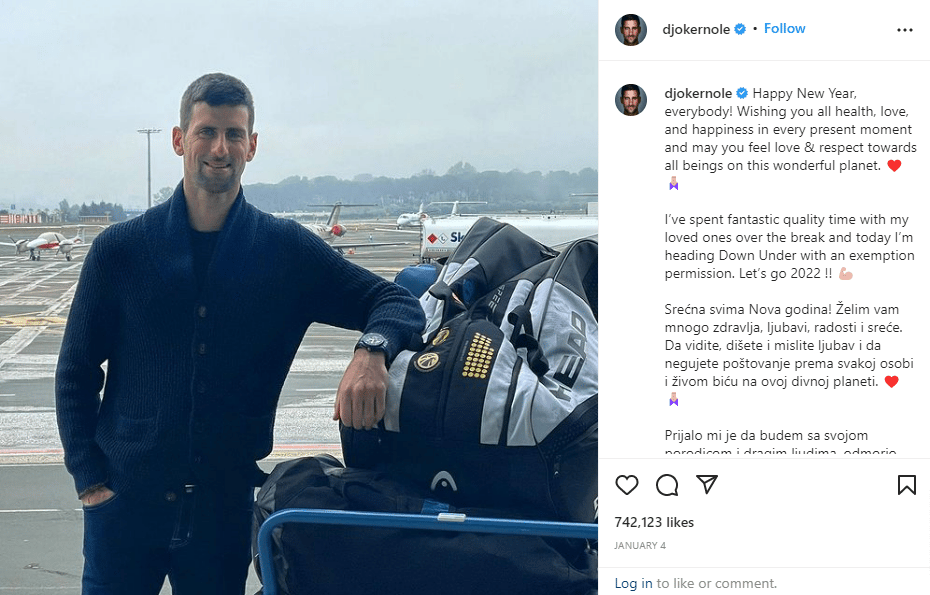 In the following turmoil, it would be revealed that Djokovic had tested positive for Covid-19 on 16 December, triggering the exemption from the Victorian officials.

However, after landing in Melbourne, Djokovic was detained by the Australian border force, who questioned the validity of his travel visa. In a swift U-turn, Victoria informed the border force that they no longer upheld Djokovic’s travel permit.

After a series of fast-paced legal battles, Immigration Minister Alex Hawk confirmed that Djokovic’s visa was indeed cancelled on 14 January, preventing his competition in the Australian Open.

Aside from wanting to keep the event safe, other motives became obvious. With a federal election later that year, the Australian government were keen to make an example out of Djokovic and garner support from a part of the electorate that were wary of Covid-19 and were in favour of a strict border policy.

While it is more difficult to tell whether Djokovic would have won the Australian Open than the two other cases mentioned above, it’s fair to say his chances were still decent.

On his way to the final, there would have been two big hitters in his half of the draw – Zverev and Nadal. In the other half of the draw, Stefanos Tsitsipas, Rublev and Medvedev were all potential threats but had to cancel each other out, leaving only one as a potential finalist.

In the end, Medvedev prevailed. Speculating what would’ve happened in a Djokovic – Medvedev final is interesting.

Djokovic had won six of their ten previous encounters, all of his victories occurring on hard courts. The critical point about Djokovic’s absence is that it boosted Nadal’s bid to win a record-breaking twenty-first major, denying the Serb a chance to catch up and supersede Nadal at twenty-two slams (if added to his Wimbledon conquest later that summer).

The question still unanswered from the visa debacle was that the ban, in theory, meant Djokovic was excluded from Australia for three years, putting future success at the tournament in jeopardy. However, Australian Prime Minister Scott Morrison hinted that the government could review this in due course.

History has come full circle with another vaccine mandate affecting Djokovic at the 2022 US Open.

Unlike last year, in response to the growth of Covid-19 variants, the US government has made the jab compulsory for players wishing to enter the tournament.

Nadal and Medvedev would be the main obstacles to overcome. But given Djokovic’s carefully developed specialism on hard courts and his strong record of three titles at the US Open, he would have the most experience of victory there compared to the remaining players in the draw.

Again, there are implications to the grand slam count, but more interestingly, these setbacks have a broader consequence.

Just as Djokovic appears to gain strength from the opposition on the court – whether it’s a formidable opponent or a hostile crowd, these tournament disasters have only fed his power and hardened his resolve.

In the middle of the 2020 and 2022 fiascos, Djokovic nearly achieved the unthinkable – a calendar grand slam in 2021 that included beating Nadal at Roland Garros, becoming the only man to do so twice. Though he lost in straight sets to Medvedev in the 2021 US Open final, it is almost sure that the blockade of Djokovic’s entry will only be used to fuel more success.

Do you think Djokovic has been treated fairly in these four instances? Where would Djokovic be now if he was allowed to play? And how will his absence from the US Open affect his career and the rest of the field? Leave your comments below.

Tomljanovic advances to second round at Indian Wells